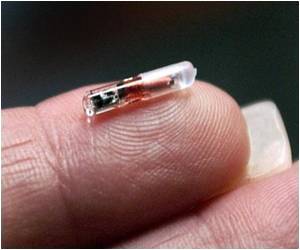 But cells are much larger than electrons, which would limit the new devices to hundreds of thousands of storage spaces per square inch.

But Yellen and Kim say that's still plenty small for their purposes.


"You need to analyze thousands of cells to get the statistics necessary to understand which genes are being turned on and off in response to pharmaceuticals or other stimuli," said Yellen. "And if you're looking for cells exhibiting rare behavior, which might be one cell out of a thousand, then you need arrays that can control hundreds of thousands of cells."
Advertisement
As an example, Yellen points to cells afflicted by HIV or cancer. In both diseases, most afflicted cells are active and can be targeted by therapeutics. A few rare cells, however, remain dormant, biding their time and avoiding destruction before activating and bringing the disease out of remission. With the new technology, the researchers hope to watch millions of individual cells, pick out the few that become dormant, quickly retrieve them and analyze their genetic activity.

"Maybe then we could find a way to target the dormant cells," said Yellen.

Kim added, "Our technology can offer new tools to improve our basic understanding of cancer metastasis at the single cell level, how cancer cells respond to chemical and physical stimuli, and to test new concepts for gene delivery and metabolite transfer during cell division and growth."

The researchers now plan to demonstrate a larger grid of 8-by-8 or 16-by-16 compartments with cells, and then to scale it up to hundreds of thousands of compartments. If successful, their technology would lend itself well to manufacturing, giving scientists around the world access to single-cell experimentation.

"Our idea is a simple one," said Kim. "Because it is a system similar to electronics and is based on the same technology, it would be easy to fabricate. That makes the system relevant to commercialization."

"There's another technique paper we need to do as a follow-up before we get to actual biological applications," added Yellen. "But they're on their way."

Research Sheds Light on Testing Nanomedicine With Blood Cells on a Microchip
Recent research has indicated that designing nanomedicine to combat diseases is an attractive ......

Unwanted Particles in Water and Food can be Identified by New Microchip
Counterterrorism measures and water and food safety concerns could be helped by a new process for .....