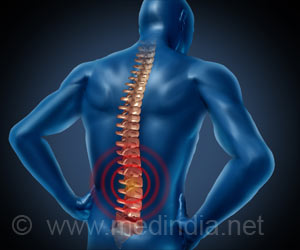 Microbes on explanted pedicle screws may hold the answer to what could be the potential cause of spinal implant failure, reports a new study.

Pedicle screws are often used to secure surgically implanted hardware to the spine in patients with spinal disease or spinal trauma. In some cases, these screws loosen over time, leading to spinal instability and consequent pain. This is a common complication of spine surgery. One reason suggested for pedicle screw loosening is implant-associated infection, but until now there has been little clinical evidence to support this theory.

Spinal fracture or spinal compression fracture indicates an injury to the spinal column. Along with the vertebrae, spinal fractures can also damage the nerves, spinal cord or ligaments in the spine.
Advertisement
‘Pedicle screws are commonly used to secure surgically implanted hardware to the spine in patients with spinal disease or spinal trauma. However, pedicle screw loosening and microbes on explanted pedicle screws could lead to spinal implant failure. Therefore, systemic biofilm-active antibiotic therapy or application of local antimicrobial coating of screws can help prevent new screw loosening.’

In the article "High frequency of low-virulent microorganisms detected by sonication of pedicle screws: a potential cause for implant failure," published in the Journal of Neurosurgery: Spine, Vincent Prinz, MD, and colleagues recount their detection of microbial colonization of surgical implant hardware in patients with no apparent clinical signs of infection.


The study focused on 82 patients who underwent surgery during which a spinal hardware implant had to be removed. None of these patients had clinical or laboratory evidence of active infection, and there was no obvious sign of infection during surgery. Following surgery, sonication was used to detect the presence of microbial biofilms on the extracted hardware. This application of sound wave energy breaks apart any sticky biofilm covering surgical implants, separating microorganisms that inhabit it. The microorganisms that had colonized the implants were then examined to specify what types were present.

Spinal cord injury is an injury to the spinal cord that results in temporary or permanent changes in its function.
Advertisement
The authors found evidence of pedicle screw loosening in 54 of the 82 patients; the other 28 patients formed a control group. Sonication verified microbial colonization of extracted hardware with one or more bacteria in 22 (40.7%) of the 54 patients with pedicle screw loosening. Sonication found no microbial colonization in hardware removed from the 28 patients in whom there was no pedicle loosening.

The most commonly found microorganisms were identified as coagulase-negative staphylococci (specifically Staphylococcus epidermis, S. hominis, S. lugdunensis, S. haemolyticus, S. cohnii, and S. Saprophyticus). These commensal bacteria are part of the normal flora covering human skin and mucous membranes, where they rarely cause harm to their hosts.

The second most commonly found microorganism was Cutibacterium acnes, which, as its name indicates, causes acne and is also commonly found on human skin. All these bacteria carry a low level of virulence. When they aggregate on medical devices implanted within a patient, they form biofilms and can produce infections that show no clinical symptoms and are not easily detected.

The authors examined patient files to find the durations of the initial surgeries in which spinal hardware had first been implanted in the spine. They found a significant difference between the length of surgery in patients in whom microbial colonization of hardware was detected (mean 288 ± 147 minutes) and patients in whom no microbial colonization was found (mean 201 ± 103 minutes).

Based on the relationship between pedicle screw loosening and microbial colonization, the authors suggest that patients in whom infected hardware is replaced would benefit from "systemic biofilm-active antibiotic therapy to prevent new screw loosening." "Alternatively," they add, "local antibiotics may be applied, such as the antimicrobial coating of screws or application of local antimicrobial hydrogel or bone substitutes."

The authors summarize their findings in four take-away points:
When asked about the importance of the study, Dr. Vajkoczy said, "The results of our study will add to a paradigm shift in spine surgery, if not more generally, to the common handling of medical hardware implants. Our increasing awareness of slow virulent infections as a cause of late hardware failure has changed our concept of prevention and treating this unfortunate complication of spine surgery.

Today, strategies are needed to prevent perioperative implant colonization, disrupt biofilms, and actively search for implant infections by using sonication and advanced microbiological analysis at the time of re-operation. The good news is that infection is a complication that can be treated successfully, if properly diagnosed."

Engineers have developed a new type of microchip muscle stimulator implant that will enable people with paraplegia to exercise their paralysed leg muscles.
Advertisement
<< Kids from Disadvantaged Backgrounds are at Higher Risk of Be...
Skilled Health Workforce in India Does Not Match the WHO Rec... >>

New hope was offered to thousands of people suffering the daily agony of spinal injury by a revolutionary spinal implant.