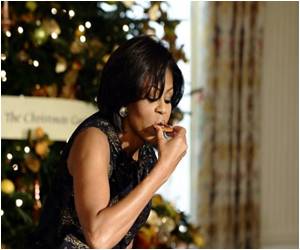 Campaigning to beat childhood obesity with exercise and good diet, US first Lady Michelle Obama hosted the first-ever 'state dinner' for children at the White house on Monday as part of her 'Lets Move' initiative.

"Thank you all for teaching kids about healthy eating," Politico quoted Obama as telling the parents in the audience.

"I want to thank you for the patience you have all shown. I'm sure there are some wrecked kitchens," she said.


According to the report, the event had brought 54 children to the President's residence, all of whom had submitted a healthy recipe in a nationwide held contest.

Obesity is resistant to instant remedies and its management is a long-term endeavor. Here are a few tips to control obesity in children.
Advertisement
The White House had asked kids to submit recipes that were "healthy, affordable and tasty," and picked a winner from each state and territory, the report said.

Winning recipes included "Kickin" chicken salad, and "Secret Service super salad" - the latter being created by a young man who was interested in joining the presidential protective service, it added.

"You're here because your recipes really stood out. And that's really saying something," Obama told the children.

Obesity is a condition where there is excess accumulation of body fat which poses a risk to the health of the individual. It can affect children and adults.
Advertisement
<< 44 Percent of Swedish Teens Believe That Cancer is Contagio...
Research Reveals What Causes Eye Movement Disorder >>

Tips to Live Longer
News Archive
News Resource
Advertisement
News Category
Do Instant Formula Foods Cause More Harm Than Good? Is a Plant-based Meat Healthier Than Animal Products? Are You Eating Enough Fiber to Stay Healthy? Preventive Vitamin A Supplementation is Missed by 2 in 5 Indian Kids Does a Mother's Diet Affect the Quality of Breast Milk?
More News
Sign up for Wellness Consult a Doctor Sign up for Selfcare