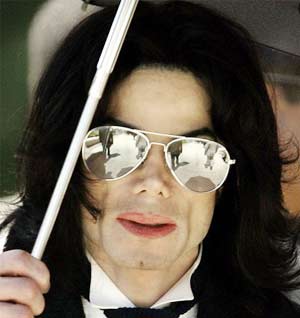 Michael Jackson fans will place flowers on his grave this week to mark the fifth anniversary of his death in Los Angeles.

But half a decade on, the pop icon's financial fortunes are positively blooming. The self-proclaimed King of Pop was struggling to avoid bankruptcy when he died on June 25, 2009. At the time, he was in rehearsals for a series of comeback shows he hoped would resurrect his earlier jaw-dropping wealth.

But in five years since, the Michael Jackson Estate -- which runs his affairs on behalf of Jackson's mother and three children -- has earned over $700 million, according to a new book about the singer's business empire.


"Michael Jackson is making more money now, five years after his death, than he had been since the prime of his career," Zack Greenburg, author of "Michael Jackson Inc.," told AFP.
Advertisement
Die-hard Jackson fans staged a flash mob Sunday ahead of Wednesday's anniversary -- when more are expected to pay their respects at the Forest Lawn cemetery just outside Los Angeles, where the pop megastar is buried.

While the business side is going well and fans are celebrating his legacy, it's been a tough few years for his family -- both through losing Jackson himself, and because of the frenzy of legal action unleashed by his shock death.

One of the biggest was the criminal trial of Conrad Murray, the doctor who, while treating Jackson for insomnia, gave him the clinical anesthetic propofol that killed him at his Holmby Hills mansion five years ago.

Murray was eventually convicted of involuntary manslaughter and jailed for four years. He was released last October after two years behind bars.

Then came the civil trial brought by Jackson's aging mother Katherine, who sued tour promoters AEG Live claiming they negligently hired an incompetent doctor and drove her son to his death. A jury threw out her claims.

But while the family came to grips with their loss, the Michael Jackson Estate, led by executors John Branca and John McClain, got straight down to business five years ago.

Above all, they had to rapidly generate revenues to stave off the massive debts that Jackson had built up in the last five years of his life.

In his heyday, Jackson -- whom Greenburg said "fundamentally changed the formula for monetizing fame forever" -- was making over $100 million a year, with hits including 1982's "Thriller," still the biggest selling album ever.

He had also bought the Beatles back catalogue for $47.5 million in 1985, an investment estimated to be worth $1 billion today.

But the child molestation charges that engulfed Jackson in the mid-2000s brought an end to the good times. Jackson, who temporarily went to live in Bahrain, almost had to sell his beloved Neverland ranch.

In his final years, he was still going on massive spending binges, taking loans on his assets to cover the bills. At the lowest point, his debts totaled some $500 million, forcing him to plan for the doomed comeback concerts in 2009.

After Jackson's death, one of the estate's first money-making ventures was the "This is It" motion picture, patched together from footage of rehearsals for the doomed final tour. The film made some $200 million worldwide.

A few months after his death, Sony and his lawyers signed a record contract said to be worth over $200 million by The Wall Street Journal -- foreseeing the release of seven albums over 10 years.

The estate also did deals with Cirque du Soleil for both a touring show and a permanent show based at the Mandalay Bay casino in Las Vegas.

Only last month, Jackson was back on stage -- as a hologram -- performing at the Billboard 2014 Music Award event in Las Vegas.

Jackson, or rather his hologram, sang and moonwalked to "A Slave to the Rhythm" recorded in 1991 and included on the recently-released album "Xscape," the second since his death, following "Michael" in 2010.

Greenburg said the star's financial turnaround, in death, was unprecedented.

"If you look at the numbers, it's actually over $700 million in five years. Over that period of time... no living artist has gotten anywhere close to that," he told AFP.

"Regardless of where the King of Pop's spirit resides, one thing's for sure: Michael Jackson, Inc. is alive and well," he concluded in his book.

Michael Jackson Suffered Sleep Deprivation for 60 Days
Michael Jackson is perhaps the only human to go two months without sleep, and this may have anyway ....

Michael Jackson Lives On...Through New Scents
Thanks to an autograph hunter in Las Vegas who asked to borrow a pen, a French perfumer is poised .....