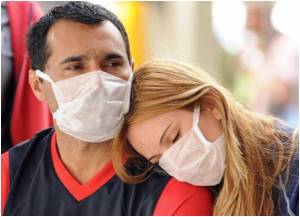 Mexico's Chihuahua state along the US border on alert after four people recently died of the virus.

"School checks will be implemented following a renewed outbreak of H1N1 human influenza, as a means of protecting all students from possible infection," said Javier Gonzalez, Chihuahua's deputy secretary of education, culture and sport.

Gonzalez said four people had died in the state since last week, when authorities discovered a fresh outbreak of the virus, and state health officials quickly launched a vaccination campaign and outreach programs to inform the population about prevention measures.


Mexico raised the first H1N1 alert in April 2009, and swine flu -- so named because it was first identified in pigs in Mexico -- has killed some 18,500 people since emerging that spring, according to the World Health Organization.

An H1N1 outbreak has also been detected in Venezuela, where health authorities last week said 85 people had recently contracted the virus, and three people with H1N1 have died this year.

Health Risks of Eating Pork
News Archive
News Resource
Advertisement
News Category
Milestone In Voluntary Blood Donation Achieved Samsung Reinvents Toilet for the Poor Which is a Better Form of Exercise: Daily or Weekly? First Phase of Foot-and-Mouth Disease Vaccination Shocking News: Polio Cases Return After a Decade in the US
More News
Sign up for Wellness Consult a Doctor Sign up for Selfcare