Metal Tongue Studs Can Cause Infection 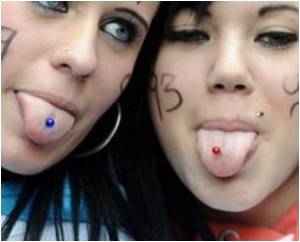 Tongue piercing is a fashion these days, a bold statement that lures many teenagers. But, people tend to overlook the possible health hazards that can be caused by tongue piercing. A new study has found that wearing a metal tongue stud puts people at risk, including infection.

Researchers said that metal studs are more likely to cause infection with tongue piercing because bacteria sticks more readily to stainless steel than those composed of plastics like Teflon.

A study by University at Buffalo researchers says that 'playing' with a pierced-tongue stud can eventually result in a gap between the front teeth.
Advertisement

They also found that the germs that cause staph infections could cover metal, but not plastic studs.


"Consumers should avoid stainless steel and titanium studs in favor of polytetrafluorethylene or polypropylene, not only because of bacteria and a potentially higher risk of local infection of the piercing channel, but also because of the risk of tooth chipping and gum recession," said lead author Ines Kapferer of Innsbruck Medical University in Austria.

Reece-Marie Hall, a 15-year-old schoolgirl, had to be rushed into emergency surgery after a tongue-piercing procedure went awry and instead ruptured a vein.
Advertisement
She and her colleagues replaced the tongue piercings of 68 women and 12 men, whose average age was about 23, with sterile studs of four different materials - stainless steel, titanium and two forms of plastic.

When they removed and examined the studs two weeks later, the researchers found significantly higher concentrations of bacteria on steel piercings than on those made with the synthetic materials.

Among the germs found more abundantly on metal studs were staphylococcus, streptococcus and pseudomonas - all commonly associated with oral and body-wide infections.

The researchers speculated that a 'bio-film' of germs sticks more readily to stainless steel than to plastic.