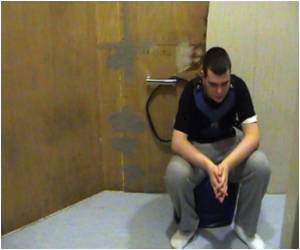 The Dutch government yesterday defended the physical restraint of mentally disabled patients in the midst of a public outcry over a teenager who was harnessed to a wall daily since 2007.

"It may be that some people are so ill that it is necessary to protect them against themselves," deputy health minister Marlies Veldhuijzen van Zanten-Hyllner told journalists after visiting the young man at an institution in Ermelo in the central Netherlands.

Although it has ben established that dietary changes brought about a decrease in symptoms of mental illness, diet could also be the triggering factor in mental disease.
Advertisement

"I take my leave of Brandon and his carers with my mind at ease," she said after meeting the 18-year-old identified in the media only by his first name, and who hears a voice telling him to do bad things, according to the minister.


Brandon's story was broadcast into Dutch living rooms this week with images of him chained in a harness to one of the four walls of his room, a practice it said was repeated daily for the last three years.

How about having bugs on your dinner plate? Well, it may sound disgusting but the world's food crisis could be eased if Westerners included insects in their diet to make up
Advertisement
The harness is around his body, leaving his hands and feet free and allowing him to move up to about a metre from the wall.

"My son lives like a caged animal," the boy's mother told the broadcaster. "He feels like a dog on a rope. It hurts to see him like this."

Despite protests by MPs in parliament and widespread condemnation in the media, the deputy minister said on Thursday she was happy with the "professionalism" of the institution.

"It is easier to judge from outside," the Dutch news agency ANP quoted Veldhuizen van Zanten-Hyllner as saying. "I don't think that there are institutions that have better methods than here."

The deputy minister said in a letter to parliament on Wednesday there were about 40 other patients living in similar circumstances to those of Brandon.

Find a Doctor Find a Hospital Blood Pressure Calculator Hearing Loss Calculator Pregnancy Confirmation Calculator Loram (2 mg) (Lorazepam) Color Blindness Calculator Accident and Trauma Care Turmeric Powder - Health Benefits, Uses & Side Effects The Essence of Yoga
This site uses cookies to deliver our services.By using our site, you acknowledge that you have read and understand our Cookie Policy, Privacy Policy, and our Terms of Use  Ok, Got it. Close
×