Men Take Twice as Many Selfies as Women: Study 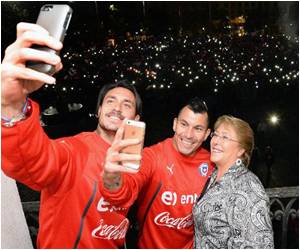 A new research has shown that men take twice more selfies and share them online as compared to women.

The smartphone company HTC surveyed 2,000 Britishers and found that a quarter of men shares selfies to make their ex or current partner jealous, the Daily Star reported.

The researchers found that men post an average of three self portraits each week as compared to women who post 1.6 pictures.


The survey disclosed that men capture their bodies into cameras 76% more compared to 45% of women, where around 20% of male shots show their chest, followed by 17% of their torso or six packs.
Advertisement
Men even confessed that they do so to make themselves appear more desirable.

Ben Walsh of HTC said that the selfie trend exploded in 2014 and showed no signs of slowing down, instead of that with all the social sites and dating apps having the best possible photos was an important part.

Woman Spends $15000 on Cosmetic Surgery to Look Good in Selfies
In a sign of the times we live in, a woman has spent a massive $15,000 on plastic surgery in order ....

Selfies may Help Detect Skin Problems
Taking selfies seem to be the in thing among teenagers but a new study reveals that it may be very ....

Smartphone App Helps Diagnose Anemia from Selfies
Selfies may now be used as a simple and effortlessly accessible tool to detect anaemia, thanks to .....