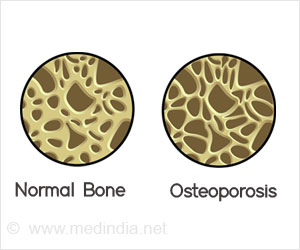 Osteoporosis is a major health problem affecting more than 44 million Americans and contributing to an estimated two million bone fractures per year. Because diminished estrogen can contribute to bone loss, menopause-age women have traditionally been the focus of osteoporosis prevention efforts.

Men face a greater risk of mortality following a fracture related to osteoporosis, a common disease where the bones become weak and brittle, according to new research presented today at the 2017 Annual Meeting of the American Academy of Orthopedic Surgeons (AAOS).

"Although women are more likely to sustain an initial, osteoporosis-related fragility fracture, men have similar rates of incurring a subsequent fracture and are at greater risk for mortality after these injuries," said lead study author Alan Zhang, an orthopedic surgeon and assistant professor at the University of California, San Francisco.


In this study, researchers reviewed the Medicare Standard Analytic Files (SAF) database to identify patients, age 65 and older, who had a diagnosis of osteoporosis and sustained a fragility fracture between 2005 and 2009. Patient records were stratified by sex and the location of a first fracture. In addition, the incidence of second fragility fractures was compared between men and women during a three-year follow-up period, as well one-year mortality rates.

Osteoporosis is a bone disease that leads to an increased risk of fractures. The bone mass is reduced and the bones are porous, thereby resulting in weakness of the skeletal system of the body.
Advertisement
Of the more than one million patients identified with a diagnosis of osteoporosis in the analysis, 87% were female and 13% male. Among these patients:

- Men who required surgical treatment for an initial fragility fracture were more likely to suffer a subsequent fragility fracture within three years. The exception was in men who suffered a vertebral (spinal) compression fracture (in these instances the risk was comparable).

"The key findings from this study show that patient sex can affect the risk for sustaining a fragility fracture related to osteoporosis," said Dr. Zhang. "These findings may be used to better counsel patients after an initial fragility fracture and to improve predictive tools for monitoring subsequent injuries."

Last year, AAOS joined the American Orthopedic Association, the Orthopedic Trauma Association (OTA) and the International Geriatric Fracture Society (IGFS) in drafting and approving new patient guidelines for preventing fragility fractures. "Orthopedic Care of Patients with Fragility Fractures" recommends that physicians proactively screen, monitor, and if necessary, assist in getting treatment for all elderly and other at-risk patients for osteoporosis following an initial bone fracture to prevent subsequent fractures.

The risk of suffering from osteoporotic fractures is 30-50% in women and 15 to 30% in men. Osteoporosis screening is currently recommended for women only.
Advertisement
<< Marijuana Use Linked to Increased Risk of Stroke, Heart Fail...
Optimizing Decision-Making to Reduce Radiation Exposure in ... >>

Increased Reimbursements for DXA Scan Will Improve Diagnosis of Osteoporosis

Hip fractures increased in the United States since 2012 following a reduction in the reimbursement rates for dual-energy X-ray absorptiometry scans.