Men are More Affected from Kidney Failure Than Women 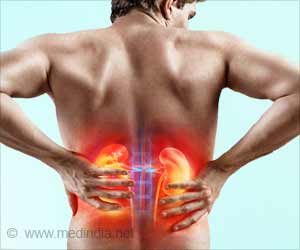 Men are affected by kidney failure to a greater extent than women, according to a new study that shows a staggering rate of 2.7 times higher risk in males than in females. The findings also indicate that the protective effects of estrogen in women and damaging effects of testosterone in men contribute to the decline in kidney function faster in men than women. Also, senior women prefer conservative care over renal replacement therapy or RRT (dialysis or kidney transplantation).

Our kidneys filter out toxic waste from the blood and regulate the fluid balance in the body as well as the balance of electrolytes and acid/base amongst others. Kidneys are important organs whose functions most of us take for granted, but when kidneys silently stop working this can create a life threatening situation. Renal replacement therapy, RRT, (dialysis or kidney transplantation) may save the lives of many patients for years and even decades, as kidney function can be replaced by machines for a long period of time - but patients on dialysis (and transplanted patients to a lesser extent) have shorter life expectancies. This is why kidney failure (end-stage renal disease) should be prevented wherever possible.

Advertisement
‘Early detection and control of risk factors would significantly reduce the incidence of chronic kidney disease in men.’

However, hypertension or diabetes may also be implicated. There are distinct gender differences in the incidence and severity of hypertension. It is more common in men and could be prevented by lifestyle changes. 'You can reduce it to a simple formula', says Massy. `Beyond treatment, more sports and less body weight will result in lower blood pressure. '


The analysis also showed that the incidence of men starting renal replacement therapy due to diabetes and to glomerulonephritis/sclerosis was more than double that of their female counterparts. Again therapeutic strategies as well as lifestyle changes are available to optimize the control of diabetes. Finally, women are known to have better outcomes for some forms of glomerulonephritis, e.g. membranous (MGN) as well as focal and segmental glomerulosclerosis (FSGS), which might explain why fewer women have to start dialysis because of these diseases. Additionally, Professor Massy adds, `if we want to reduce the incidence of chronic kidney disease in men, we should therefore concentrate on the early detection and control of these risk factors. Obviously, we need to broadcast these messages if we want to reduce the number of men who have to start dialysis'.

Breathing Dirty Air may Lead to Kidney Failure
Breathing in unclean air due to increasing air pollution could cause kidney damage with resultant .....