Meet the the Iron Lady in US Arm Wrestling 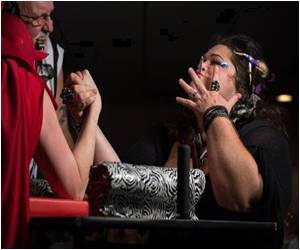 "Amy Smackhouse" slams down her opponents hand with one hand, and the other hand holding a bottle of bourbon in her latest victory in the women's arm-wrestling tournament.

The tongue-in-cheek event aims at humor and to raise money for charity, but there is a competitive edge of sorts.

We start picturing chocolate, butter, dry fruits and something sweet when we think of cakes.
Advertisement

In regular life, Smackhouse is called Andrea Kavanagh, and she works at an environmental non-profit organization.


But on stage in the US capital Saturday evening, she dons her satin red, white and blue cape awarded to the national arm-wrestling champion and works to entertain the crowd.

Scientists have identified that a single whiskey sample contains hundreds of nonvolatile compounds.
Advertisement
Her bottle of whisky, a cigarette perpetually hanging from her mouth, her heavy makeup and bawdy jokes are all part of the act: a satire of British singer Amy Winehouse, who died in 2011 and was known for her drinking and drug-fueled lifestyle.

"That's funny, since physically we are very different," Kavanagh says with a burst of hearty laughter.

Arm-wrestling contests -- or rather the DC Lady Arm Wrestlers club she helped found in 2010 -- are just for fun, and for charity.

In the fall, Kavanagh will fight for her national title at a championship in Washington.

But Saturday, the eight competitors were battling for the "Golden Biceps" title and to get the audience betting heavily on the outcome -- with all profits going to Knowledge Commons DC, a free community school.

"We've been around for four years, and in 13 tournaments we have raised almost $50,000," said Ashley Evans, whose nom de guerre is "Sailor Slamrock," a rebellious leprechaun-style character dressed in green and ready to rumble.

"It's also about women empowerment. It shows that we're just as strong as men."

Like in boxing, a platform is erected in the middle of the room, on which stands a simple table where the competitors do battle.

Phil Yunger, a gray-haired retiree who bills himself as a tough Army vet, serves as the completely corruptible tournament referee -- who pledges to turn bribe money over to charity.

"The ladies? Oh they're a pain in the ass. They're arm wrestlers. Pinch yourself, would you arm-wrestle one of these people?" he says, tongue-in-cheek.

"Margaret Thrasher" storms onto the stage, showing off her fake Union Jack tattoo, a homage to her pretend British heritage. Dressed conservatively, with her hair in a severe bun, she mimics the high-brow British accent of the former prime minister.

"My technique is very simple," she joked.

"Usually my opponents start by looking down my blouse, but then they realize that I am this old, ugly lady and that's when I give it all."

But maybe Jackie O was saving her strength for another bout.

"Well, I look forward to seeing Marilyn Monroe on stage."