Meet the Real-life Barbie from Bradford 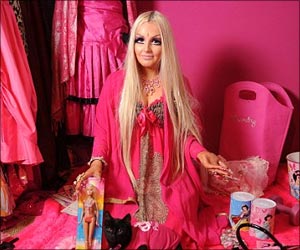 Lhouraii Li has been named the real-life Barbie who spends four hours everyday in perfecting herself.

Lhouraii Li, from Bradford, West Yorkshire, has claimed that her "extraordinary appearance" is a combination of Japanese fashion and pink princess Barbie, the Daily Express reported.

The 21-year-old girl has admitted that she never leaves her home without a "full-face of make-up".


The real-life doll uses special eye-enlarging color contacts to make her eyes more captivating and doll-like, and has shaved her eyebrows in order to draw them higher so that they go well with her big eyes.

Li added that it's not a "chore" for her, and the way other people get up and watch television, she gets up and does her make up and insisted that she finds it equally entertaining.

Pennyslvanian Artist Gives Barbie Real-woman Makeover
In Pennyslvania, an artist has created his own version of a typical blonde Barbie, which has the ......

Protests Against Berlin's Barbie Dreamhouse
Slamming it as a sexist cliche, feminist activists were among several dozen people who demonstrated ...