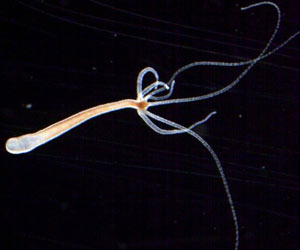 The tiny hydra - a centimeter-long polyp that inhabits fresh water all over the world - does not age and, if kept in ideal conditions, may just live forever, revealed researchers.

Hydra could live in ideal conditions without showing any sign of senescence - the increase in mortality and decline in fertility with age after maturity, which was thought to be inevitable for all multicellular species, the findings showed.

Eat Right and Beat Those Wrinkles - Foods that Cause Aging

Bad eating habits will affect your health as well as your skin and make you look older than your biological age. Eat the right foods and stay younger than your age.
Advertisement
‘Hydra's body is made of stem cells with very few fully differentiated cells. They never age because stem cells have the ability to continually divide, and so a hydra's body is being constantly renewed.’

Researchers Daniel Martinez, professor at Pomona College in Claremont, US, said, "I do believe that an individual hydra can live forever under the right circumstances. I started my original experiment wanting to prove that hydra could not have escaped aging. My own data has proven me wrong - twice. The chances of a hydra living forever are low because they are exposed to the normal dangers of the wild - predation, contamination, diseases."


Working with James Vaupel of the Max Planck Institute for Demographic Research (MPIDR) in Rostock, Germany, Martinez duplicated earlier findings regarding hydra immortality, but on a much larger scale.

Is there anyone in this world who fails to be swayed by the magic of youth? None, for when youth explodes joyously all Nature smiles!
Advertisement
Martinez said, "That scale is key to the study's significance, along with the fact that the hydra showed constant fertility over time, defying expectations for most organisms."

Martinez said, "Many, many hours of work went into this experiment. I am hoping this work helps sparks another scientist to take a deeper look at immortality, perhaps in some other organism that helps bring more light to the mysteries of aging."

But why is this tiny organism able to carry on living while humans have to continue their search for the mythical fountain of youth?

Explaining why hydras can carry on living without aging while humans have to continue their search for the mythical fountain of youth, Martinez said that these tiny organisms are made of stem cells.

The findings appeared in the Proceedings of the National Academy of Sciences.

Experience the bliss of vinotherapy - the power of grapes for a kissable skin.
Advertisement
<< Unsynching the Heartbeat a Little Each Day Halts Progressio...
Fillings Made With Bioactive Glass Could Prolong the Tooth ... >>

Successful Aging Linked to Harmful Drinking Among Over 50s

Harmful drinking may be a hidden health and social problem in successful older people. There must be explicit guidelines on alcohol consumption for this group.

Sanatogen The Essence of Yoga Drug - Food Interactions Drug Interaction Checker Nutam (400mg) (Piracetam) Hearing Loss Calculator A-Z Drug Brands in India Calculate Ideal Weight for Infants Daily Calorie Requirements Drug Side Effects Calculator
This site uses cookies to deliver our services. By using our site, you acknowledge that you have read and understand our Cookie Policy, Privacy Policy, and our Terms of Use