Mediterranean Diet Could Shield You from Deadliest Form of Skin Cancer 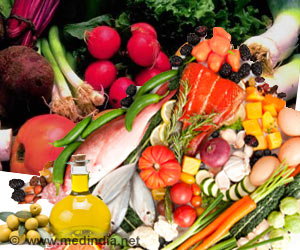 A Greek-style Mediterranean diet that is rich in antioxidants and omega-3 fatty acids could provide protection against even the deadliest form of skin cancer, according to a new study presented at the International Congress of Dietetics in Sydney.

The study was conducted by a team of Israeli researchers who found that Greece had one of the lowest rates of melanoma among European and other sunny countries.

The researchers said that drinking antioxidant rich beverages could help reduce the levels of malondialdehyde, an indicator of oxidative stress in the body linked to cancer risk, by 16 percent.


"It's more than their olive skin. We think the difference in skin cancer rates may be partially due to the different eating habits in these countries", lead researcher Dr Niva Shapira said.

The word 'Cholesterol' rings danger bells as soon as it is mentioned. This important chemical is important for the normal metabolism of the body and is dangerous only if present in excess.
Advertisement
<< High Prevalence of Musculoskeletal Disorders in NZ
Labeling Fears Helps You Conquer Them >>