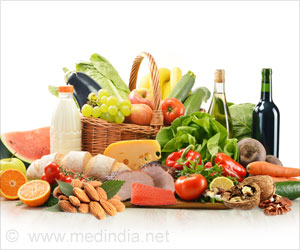 Mediterranean diet rich in olive oil, fruits, vegetables, legumes, nuts and seeds is recommended to reduce the risk of type 2 diabetes in women. It can help to reduce the risk of developing diabetes by 30 percent, according to a new study. The findings of the study are published in the journal JAMA Network Open.

"Our findings support the idea that by improving their diet, people can improve their future risk of type 2 diabetes, particularly if they are overweight or have obesity," said corresponding author Samia Mora, MD, MHS, of the Brigham's divisions of Preventive Medicine and Cardiovascular Medicine and an associate professor at Harvard Medical School. "A lot of the benefit we see can be explained through just a few pathways. And it's important to note that many of these changes don't happen right away -- while metabolism can change over a short period of time, our study indicates that there are longer term changes happening that may provide protection over decades."


The Women's Health Study (WHS) enrolled female health care professionals between 1992 and 1995, collecting data through December 2017. It was designed to evaluate the effects of vitamin E and low-dose aspirin on risk of heart disease and cancer.
Advertisement
Additionally, participants were asked to complete food frequency questionnaires (FFQs) about dietary intake when the study began and answer other questions about lifestyle, medical history, demographics and more. More than 28,000 women provided blood samples at the beginning of the trial.

Mora and colleagues leveraged data from the FFQs and blood samples to investigate the relationship between the MED diet, type 2 diabetes and biomarkers that might explain the connection. To do so, they assigned each participant a MED diet intake score from 0 to 9, with points assigned for higher intake of fruits, vegetables, whole grains, legumes, nuts and fish, moderate intake of alcohol, and lower intake red meat or processed meat.

The team measured a range of biomarkers, including traditional ones such as cholesterol, and more specialized ones that can only be detected using nucleic magnetic resonance. These included lipoproteins -- molecules that pack and transport fats and proteins -- and measures of insulin resistance, a condition in which muscle, liver and fat cells do not respond to normal amounts of insulin. Insulin resistance is often a precursor to diabetes.

Biomarkers of insulin resistance appeared to be the biggest contributor to lower risk, followed by biomarkers of body mass index, high-density lipoprotein measures and inflammation.

"Most of this reduced risk associated with the Mediterranean diet and type 2 diabetes was explained through the biomarkers related to insulin resistance, adiposity, lipoprotein metabolism and inflammation," said first author Shafqat Ahmad, PhD, a researcher in the Molecular Epidemiology Unit at Uppsala University, Sweden, who helped conduct the study while working at the Brigham. "This understanding may have important downstream consequences for the primary prevention of diabetes disease."

One of the strengths of the study was its length -- unlike many previous studies that have only looked at short-term effects of diets, the WHS followed participants for up to 25 years to see who developed type 2 diabetes. But the authors note several limitations, including that study participants were predominantly white and well educated, and all were female health professionals. In addition, dietary intake was self-reported and only examined at the start of the study. Biomarkers were also only measured when participants entered the study.

Mora emphasizes that insights into the biology that explains how the Mediterranean diet may help protect against diabetes could be helpful in preventive medicine and for physicians speaking to patients about dietary changes.

"Even small changes can add up over time," she said. "And there may be many biological pathways that lead to a benefit. One of the best things patients can do for future health is to improve their diet, and now we are beginning to understand why."

Long Life: Olive Oil in Mediterranean Diet may Add More Years to Your Life
Want to live longer? Consuming olive oil, one of the main ingredients used in the Mediterranean ......

Obesity is a Major Risk Factor in Severe COVID-19 Cases
Obesity has emerged as a major risk factor for severe COVID-19 cases. Obesity also has other health ...