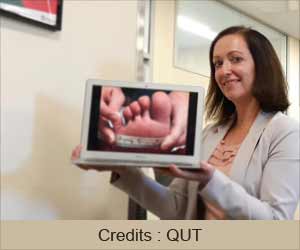 Healthcare consumers are being empowered by sharing medical selfies, reports a new study. The findings of the study are published in the Journal of Medical Internet Research.

Advertisement
‘Taking medical 'selfies' and sharing them with a doctor empowers and reassures healthcare consumers, and can also improve doctor-patient relationships.’

Taking medical 'selfies' and sharing them with a doctor empowers and reassures healthcare consumers, and can improve doctor-patient relationships, a two-part study led by Queensland University of Technology (QUT) in Brisbane, Australia has found.
Dr. Burns said the findings from the photographic trial supported conclusions drawn from the interview study.


"The first study asked a range of people what they think about the role of this kind of consumer-generated data, and the second study was to see how people engage with it, as there can be a difference between what people say they will do and what they will do," she said.
Advertisement
"But these two studies largely confirmed each other. Consumers feel this data is valuable, it helps them have a sense of autonomy in their care, improves their view of the service they are being provided, and it enhances the relationship between doctor and patient because there is a sense of mutual respect and communication.

"The parents who took part in the trial said they felt reassured and that the service was going above and beyond. They said normally the door feels shut when you leave a hospital, and providing the photos was a way to stay connected and contact the surgeon afterwards."

Dr. Burns said while for clinicians it may be difficult to integrate patient-generated data, such as photographs, video, or information from apps or body monitoring devices, into clinical records, medical professionals should consider it.

"This study adds to a body of research that shows there are benefits for clinicians and also for patients in engaging with this kind of patient or carer-generated information," she said.

"If doctors ignore it and don't engage, this research shows that it impacts the service experience and that some patients will switch doctors.

"In one case, a mum had a six-week-old baby who was constantly vomiting, and she felt no one was listening to her concerns. She was so unimpressed by the doctor's responses to her that she changed providers. When she took a video to the next doctor, they assessed that something was wrong and that her daughter needed surgery.

"My Health Record should also consider ways to integrate patient-generated health data. People have expressed concerns about privacy and accessibility, but giving them an option to upload their own information may give them a reason to use the portal, to be less fearful of it."

Selfies in Smartphones to Self-Diagnose Diseases
Researchers have developed a novel cell phone imaging algorithm that can diagnose medical ......

Selfie-taking on Smartphones Making People Happier
Selfie taking on smartphones may lead to increased happiness and may even help to lessen the ......