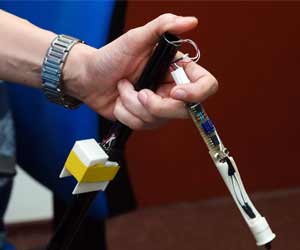 Newly developed mechanized cane can measure patients' rehabilitation process without noticing it, reports a new study. The findings of the study are published in the scientific journal Sensors.

Robot-aided rehabilitation represents a step forward for patients with walking difficulties. However, its high price, together with some adaptation and transfer problems, keep limiting its use at present.

Advertisement
‘Newly designed mechanized cane measures patients' rehabilitation process without any impact on them. This discovery could offer new hope for millions of people with walking difficulties.’

In this regard, the Embedded Systems Engineering Group of the University of Malaga, specializing in the design of physical devices to aid users, such as a smart wheelchair, has developed a mechanized cane that can measure patients' rehabilitation process without any impact on them.


This is a low-cost device, adapted to users and accessible to anyone, since the researchers have uploaded its designs, algorithms and electronic diagrams of its pieces to the Internet under an open license.
Advertisement
This cane monitors users' weight-bearing while walking, providing individualized information on their progress, by means of two embedded pressure sensors placed at two different depths in the tip of a regular cane so that they don't affect cane ergonomics. Likewise, so as to simplify its use, it includes a wireless charger, and data can be collected by a mobile phone via Bluetooth.

"We seek a minimal interaction with patients, to avoid any cognitive load and prevent any impact on their daily routine," explains Cristina Urdiales, Head of the Department of Electronic Technology.

Furthermore, promoting direct transfer to the industry is another objective of this project, shared under an open license and published in the scientific journal Sensors. "We have managed to keep the cost of manufacturing the cane below 100", says Joaquín Ballesteros, the designer, who adds that, thus far, it has been downloaded by more than 150 researchers, from the USA and France mainly.

Experts explain that, in contrast to smart bracelets or watches already on the market which are based on statistics for healthy users, this device developed at the UMA, in collaboration with ESS-H Profile at Mälardalens University (Sweden), adds real measurement of step parameters.

But apart from its medical applications, which enable specialists to control each patient, the cane is also aimed at promoting active aging. In fact, it is already being tested in the so-called Active Participation Centers.

Adding intelligence by developing a neuronal network, capable of processing and interpreting data collected in the cane, to predict more complex indicators, is the next stage of the project, which represents a step forward in the functionality of walking aids.

Robotic Wheelchair That can Now be Controlled With the User's Thoughts
US scientists have developed a machine that enables people to navigate a robotic wheelchair through ...

Walking Difficulties Linked With Heart Disease Risk Factors
Are you facing difficulty in taking rapid steps? Beware, it may indicate the risk of chronic heart ....

Treatments That Reduce Knee Buckling may Help Prevent Falls in Aging Patients
Symptoms of knee instability in older adults may indicate an increased risk of falling and of ......