Mechanism of the Largest Protein Identified 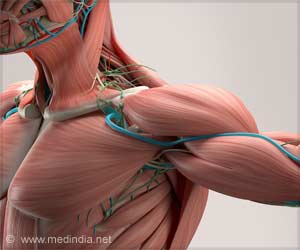 An important mechanism in the regulation of a protein that plays an essential role in the function of skeletal muscle and the heart has been identified by recent research at the Centro Nacional de Investigaciones Cardiovasculares Carlos III (CNIC) and Columbia University in New York.

The study describes a new mechanism in the regulation of the elasticity of the giant protein titin. Titin, explained Alegre-Cebollada, is a key protein in the functioning of striated muscles throughout the body, particularly in the heart: "the proof of this is that mutations in the titin gene are a common cause of diseases affecting the muscles of the body and the heart."

Advertisement
‘The most interesting finding is that the formation and isomerization of disulfide bonds cause major changes in the elastic properties of titin.’

Titin is the largest protein in the human body and as such has a multitude of functions. According to Jorge Alegre-Cebollada, "in simple terms, we can think of titin as a 'molecular spring' that allows muscle cells to contract in synchrony." However, it is not a simple spring, and the many mechanisms that determine titin elasticity include the unfolding of specific regions in its structure called immunoglobulin domains. In all, titin elasticity is determined by the concerted action of more than 100 immunoglobulin domains within the protein.


Using bioinformatic and structural biology approaches, the research team found that the immunoglobulin domains have a high cysteine content. This amino acid confers special properties. Jorge Alegre-Cebollada explained that "when 2 cyteines in a protein come close to one another, they can form a chemical link between different parts of the polypeptide chain called a disulfide bond."
Advertisement
The research team observed that many of the immunoglobulin domains in titin form disulfide links and that the cysteines participating in them can change dynamically, a process called isomerization. The most interesting finding was that the formation and isomerization of disulfide bonds cause major changes in the elastic properties of titin.

The formation of disulfide bonds is an example of a broader class of biochemical transformations known as reduction-oxidation (redox). It has long been known that many disease processes affecting the heart, including myocardial infarction, involve sudden and drastic changes in the redox state of the heart muscle.

Dr. Alegre-Cebollada's group is currently investigating how our cells modify the titin redox state as a mechanism to modulate skeletal and heart muscle activity and how different diseases can interfere with the mechanical action of the protein, resulting in loss of functionality. Alegre-Cebollada concludes, "Our mechanical findings were made possible by reconstituting contractile systems in vitro. While we have learned a lot through this approach, the challenge now is to understand how these basic principles operate in a living organism. This is the focus of our current research, using a multidisciplinary approach that combines advanced techniques in physiology, biology, and biochemistry."

The study is the result of a collaboration between Dr. Alegre-Cebollada and Professor Julio Fernández at Columbia University. Professor Fernández is a pioneer in the development of single-molecule biophysical techniques for investigating the mechanical properties of proteins, and his collaboration with Dr. Alegre-Cebollada has made it possible to describe the biochemical regulation of protein mechanics.

The complete research is published in the journal Nature Communications.

Source: Eurekalert
Advertisement
<< Recommendations for Fluid Intake During Workouts
Asthma Costs Over $80 Billion Per Year for the US Economy >>

Rhabdomyolysis
Rhabdomyolysis is the breakdown of muscle tissues leading to the release of contents of the muscle ....

Dystonia
Dystonia is a neurological condition in which the patient experiences involuntary muscle ......