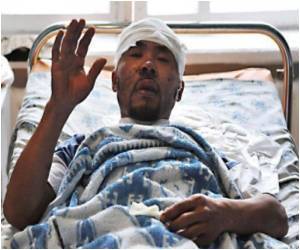 The discovery of how phantom limbs develop might help in the evolution of better treatment for the difficult problem.

For phantom limbs simply don't exist. But the patient believes they do.

A person has a 'phantom limb' when they continue to perceive sensations in their limb even when the body part is no longer there, such as after amputation.


A phantom limb can also develop when the sensory system no longer functions properly, such as in a complete spinal cord injury or after administration of an anaesthetic.

Leg Starts Growing Back After Amputation

Mandy Sellars, 36, who is suspected to suffer Proteus syndrome, claims that the stump after her leg amputation is growing back.
Advertisement
People usually perceive their phantom limbs to be in distinct positions, and often experience pain in the limb - however, the cause of this is not well understood.

Now Australian studies seem to show that there is no default position that the phantom moves into after it forms.

"Our research suggests that the state of nerves in the limb at the time the phantom is forming is very important in determining how the phantom develops," says Prof Simon Gandevia from Neuroscience Research Australia (NeuRA).

Because distortions of body image, such as phantom limbs, are difficult to treat, a better understanding of the mechanisms behind their formation will help developing more effective treatments.

Prof Gandevia and colleague Dr Lee Walsh conducted a study in which they temporarily anaesthetised participants' hands to induce a phantom limb.

The team found that the state of the nerves - i.e. how much they were being stimulated - over the period when participants were losing sensation in their hand was key in determining the final perceived position of the phantom hand.

"This might also be true for phantom pain," says Prof Gandevia. "In other words, the amount and type of nerve stimulation around the time of amputation or injury could also be important in determining the type and degree of pain perceived in the phantom limb."

'Dynamic changes in the perceived posture of the hand during ischaemic anaesthesia of the arm' was published (1 Dec 2011) in The Journal of Physiology.

A phantom limb is a complex phenomenon involving a sensation that an amputated or a missing limb, or an ...
This site uses cookies to deliver our services.By using our site, you acknowledge that you have read and understand our Cookie Policy, Privacy Policy, and our Terms of Use  Ok, Got it. Close
×