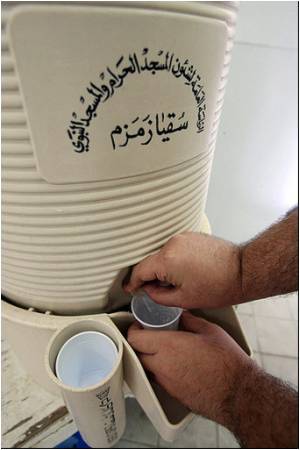 Claims that holy Zamzam water from a spring inside the Grand Mosque complex of Mecca is polluted and stressed there were no health risks have been rejected by Saudi authorities.

The Presidency of the Two Holy Mosques Affairs said in a statement Saturday it had no reports suggesting there was any issue with Zamzam water which was safe for drinking.

A spokesman for the presidency, Ahmad al-Mansuri, told AFP daily samples were being taken from the 31-metre (105-foot) deep well, and measures were taken to ensure it was safe.


According to Islamic tradition, the spring has never gone dry for over 4,000 years and pilgrims treat the water as sacred and having miraculous healing powers.

The British media had reported this week that the well was polluted and that drinking from it could cause diseases such as cancer.

Meanwhile, the Saudi embassy in London issued a statement insisting Zamzam water was "not polluted" and that analysis at European laboratories in March confirmed it to be safe.

Worshippers at the Grand Mosque are able to drink Zamzam water from hundreds of scattered taps. Saudi authorities have banned any commercial exports of the water.

Muslims believe Zamzam came into being to provide Hagar, Abraham's wife according to Islamic teachings, and her baby Ishmael with water in the hot, dry valley of Mecca where God ordered Abraham to leave them.

In her desperate search for water for the baby, Hagar ran seven times between the hillocks of Safa and Marwa until she saw water running between the legs of her baby.

Part of the hajj pilgrim of Muslims is called "Saiy", a run between Safa and Marwa in commemoration of Hagar's run in search of water.

Water - Nutrient that Beats the HeatTips for Healthy Fasting During RamadhanWater Matters: Why You Need to Drink Enough Water Everyday