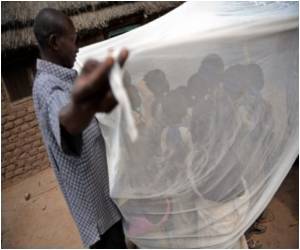 Governments in the Mekong region must act "urgently" to stop the spread of drug-resistant malaria, says the World Health Organization.

There is growing evidence that the malaria parasite is becoming resistant to a frontline treatment, the anti-malarial drug artemisinin, in southern and central Vietnam and in southeastern Myanmar, the WHO said in a statement.

Drug-resistant malaria was found on the Thailand-Cambodia border eight years ago, and has since also been discovered along the Thailand-Myanmar border, according to scientists.


WHO regional director, Shin Young-soo, said countries must "urgently address this issue before we put at risk not only the fragile gains we have made in malaria control but also our goal of a malaria-free Western Pacific Region."

Mosquito-borne diseases, like malaria, filaria, dengue, etc are common in places conducive of mosquito breeding. Swamps, ponds and stagnated drainage provide optimal breeding ground for mosquitoes.
Advertisement
Countries in the Mekong region must "intensify and expand" operations to contain and eliminate artemisinin-resistant malaria, Shin said at a WHO regional meeting in Hanoi.

Drug-resistant malaria in Vietnam is mainly concentrated in three central and southern provinces, say health officials, adding that there are a number of key factors which make tackling the problem difficult in the communist country.

The population in the affected provinces are very poor, highly mobile, and have not widely embraced DEET-treated mosquito nets which could reduce malaria infections, according to media reports of a government conference in July.

People in the affected provinces often received outpatient treatment and frequently fail to complete a full course of anti-malarial treatment.

Resistance to artemisinin does not prevent patients being cured, thanks to other partner drugs, but treatment typically takes a few days instead of 24 hours.

Malaria is a life-threatening disease caused by parasites that are transmitted through the bites of infected mosquitoes.

It killed an estimated 655,000 people in 2010, mostly African children, although mortality rates have fallen sharply over the past decades, according to the WHO.

Malaria is a common parasitic disease of the tropics, resulting in a million deaths every year. Early detection and adequate treatment at the right time can reduce deaths due to malaria. Test your knowledge on this condition by taking this quiz.
Advertisement
<< Study Finds Ways To Reduce Acrylamide Levels in French Frie...
Withdrawal Symptoms Linked to Relapse for Cannabis Users >>

Drug - Food Interactions The Essence of Yoga Blood - Sugar Chart How to Reduce School Bag Weight - Simple Tips Find a Doctor Hearing Loss Calculator Nutam (400mg) (Piracetam) Pregnancy Confirmation Calculator Blood Donation - Recipients Color Blindness Calculator
This site uses cookies to deliver our services. By using our site, you acknowledge that you have read and understand our Cookie Policy, Privacy Policy, and our Terms of Use