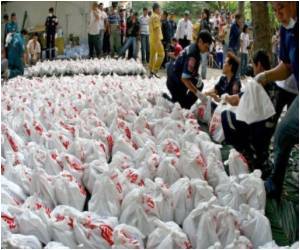 Nitancha 17, ended her five-month pregnancy herself causing severe bleeding in a Buddhist nation where abortion is illegal and pregnant teens are stigmatized, the young Thai didn't have a second option.

Rejected by the baby's father and frightened at the idea of talking to her family, she sought a solution on the Internet, where suggestions ranged from throwing herself down the stairs to illegal clinics and abortion pills.

After saving for several months to scrape together 5,300 baht (175 dollars), Nitancha -- who was 16 at the time -- last year used a drug against stomach ulcers, because a possible side effect was to cause miscarriage.


It had the desired result -- accompanied by a lot of blood in the toilet of her new boyfriend's house, and an emergency trip to hospital.

"I only knew that I had to get rid of the baby. I was about to go to college. I was a high school senior. I had to have a future," said Nitancha, whose name has been changed at her request.

Birth defects are abnormalities, which occur before the birth of the baby and can be caused due to genetic, environmental and other unknown reasons.
Advertisement
Since the discovery in a temple in Bangkok in November of more than 2,000 foetuses from illegal abortion clinics, the sensitive issue has shot up the national agenda.

Police are raiding suspected clinics, the government has suggested banning sex with girls under 20, and lawmakers have proposed relaxing legislation that only allows abortion in cases of rape or when the pregnancy is thought to pose a danger to the mother's physical or mental health.

But whatever the consequence of this new awareness, it will come too late for Nitancha, who is far from being an isolated case.

The discovered foetuses, which had been taken to the temple for cremation, were only the "tip of the iceberg", said Professor Kamheang Chaturachinda, president of the Women's Health and Reproductive Rights Foundation of Thailand.

According to this former president of the Royal Thai College of Obstetricians and Gynaecologists, 300,000 to 400,000 Thai women undergo abortions performed by untrained people in unhygienic conditions each year.

About 12 to 15 percent of them are teenagers.

In comparison, France -- which has a similar population of 65 million inhabitants and where abortion is legal -- has just over 200,000 abortions a year.

Abortions in back-street clinics pose a risk of complications, including infertility and death.

"When women go to illegal clinics, often afterwards they feel severe pain from infections, because the mission was not completed," said Montri Pekanan, director of the Family Planning Association of Thailand.

He supports the "principle" of a relaxation of the law, while wanting a strict framework to ensure women's safety.

Jaded Chouwilai, manager of the Friends of Women Foundation, a counselling group, also called for protection for women who "have no choice" when they take such a decision.

But there is little or no hope of changing the law in a society where abortion is seen as a "sin," say the two activists.

"It is related to religion. Buddhism does not say anything about abortion but says killing is forbidden. People are strongly against abortion," said Montri.

The government, gearing up for an election that is expected this year, has no intention of changing the abortion laws.

"To propose a new law, it needs the consensus of society," said Tares Krassanairawiwong, a senior official at Thailand's health ministry. "At the end of the day, I would say we will follow the way the society chooses to go."

Even if abortion was legalised, it might not put an end to operations in back-street clinics, said Professor Kamheang.

"The problem is healthcare providers do not want to carry out abortion for personal and religious reasons," he said.

Nitancha, who had merely been counting the days of her cycle to avoid pregnancy, has her own message for other teenagers: "There are many ways to protect yourself, like using condoms, but if you know that you are a fun-loving girl who is not ready to be a mother, you'd better use birth control pills."

Statistics say that approximately 42 million abortions are done every year, worldwide. So take this quiz on abortion and get to know its essential facts.
Advertisement
<< Brain Change Suppresses Fear in Teens
WHO Says Haiti's Cholera Outbreak Has Not Peaked >>

Stillbirth
News Archive
News Resource
Advertisement
News Category
Milestone In Voluntary Blood Donation Achieved Samsung Reinvents Toilet for the Poor Which is a Better Form of Exercise: Daily or Weekly? First Phase of Foot-and-Mouth Disease Vaccination Shocking News: Polio Cases Return After a Decade in the US
More News
Sign up for Wellness Consult a Doctor Sign up for Selfcare