Married Gays In Mexican Capital Can Now Adopt, Thanks to Court Ruling 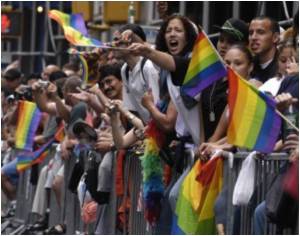 Mexico's Supreme Court on Monday endorsed adoptions for married gays in the capital, with a majority of nine out of eleven votes, a court spokesman told AFP.

The top court this month already validated gay marriages in Mexico City, quashing the first part of a complaint lodged by the federal attorney general.

Mexico City's gay community is gradually turning the capital into a relative oasis in a staunch Catholic country reknowned for its conservatism and machismo.
Advertisement

To deny gay couples the possibility of adopting children "would be constitutionalizing discrimination," said magistrate Arturo Zaldivar during Monday's session.


"It got through despite all the conservative voices which generated a lot of social divisions," leftist deputy David Razu, who sponsored the law, told AFP.

Mexico City's tourism minister Thursday offered a free honeymoon to the first gay couple to wed in Argentina after that country made Latin American history by legalizing same-sex marriages.
Advertisement
Mexico City's leftist government approved gay marriage and opened the way for adoptions last December, provoking a wave of uproar among conservatives and the church in the mainly Roman Catholic nation.

Marriages between gay and lesbian couples began in March, in a first for a Latin American municipality.

The Supreme Court earlier Monday censured a top Catholic cardinal who had accused its justices of receiving bribes to condone the capital's gay marriage law.

"One cannot, under any capacity and with impunity, accuse the 11 justices of the country's highest court of being corrupt," said justice Sergio Armando Valls, who put forward a unanimously-adopted vote of censure.

Cardinal Juan Sandoval Iniguez, number two in the Mexican Catholic hierarchy, lashed out at the high court on Sunday, 10 days after it rejected a bid by the federal attorney general to quash the new law as unconstitutional.

"I don't doubt that (the justices) are bribed by (Mexico City mayor Marcelo) Ebrard. They're bribed by international organizations," Sandoval said.