Marriage may Not be 'Healthy' for All 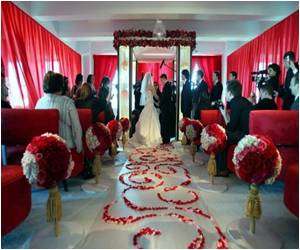 A new study claims that marriage may not be as good for health as presumed earlier.

Researchers made two discoveries that explain why: First, marriage provides less protection against mortality as health deteriorates, even though it does seem to benefit those who are in excellent health. Secondly, married people tend to overestimate how healthy they are, compared to others.

"We believe marriage is still good for the health of some people, but it is not equally protective for everyone," said Hui Zheng, lead author of the study and an assistant professor of sociology at The Ohio State University.


"For those who are already in poor health, marriage doesn't seem to provide any extra benefits," he stated.

The results generally held true for both men and women. They were also similar for all types of unmarried people, including divorced, widowed and never married, as well as separated people.
Advertisement
Zheng conducted the study with Patricia Thomas of the University of Texas at Austin.

The researchers used data on about 789,000 people who participated in the National Health Interview Survey from 1986 to 2004. In this survey, participants rated their own health on a five-point scale (excellent, very good, good, fair, poor). Zheng and Thomas then used follow-up data to identify the nearly 24,100 people who died between 1986 and 2006.

The researchers used a statistical model to determine how self-rated health, marriage status and other factors related to mortality risk over a three-year period.

Overall, the researchers confirmed the volumes of previous research that has found that, overall, being unmarried - including never married, separated, divorced and widowed - significantly increases the risk of death within three years. For example, a never-married person who lists his health as "excellent" is two times more likely to die within three years than a similar married person in excellent health.

But their new finding is that as self-rated health declines (from excellent down to poor), the mortality advantage for married people diminishes.

For example, for never-married people, each unit decline in health (e.g., from fair to poor) decreases the risk of death compared to married people by 12 percent. When people rate their health as "poor," there is essentially no difference in mortality risks between married and unmarried people.

"These results suggest that marriage may be important for the prevention of disease, but not as helpful once people become seriously ill," Zheng said.

"That's why we see a protective effect of marriage when people are in excellent health, but not when they are in poor health," he noted.

The researchers confirmed that marriage offers diminishing protection against mortality at poorer levels of health by using another, more objective measure of health. They compared married and unmarried people's responses to questions about how well they could handle routine care activities such as eating and bathing, as well as activities that promote independent living, such as driving and cooking.

These results also showed that married and unmarried people have similar mortality rates when they have worse health as measured by limitations on their ability to perform these types of activities.

"Marriage is helpful in persuading people to adopt a healthy lifestyle that can lead to a longer life. But it is not as useful in helping people recover from a serious illness," Zheng said.

But the diminishing protection of marriage as health declines is only part of the explanation about why marriage may not guard health as much as assumed. The other explanation uncovered by the study is that married people overestimate how healthy they are.

"The married don't seem to report their health as being poor until they've already developed much more severe health problems. They have a different threshold for what they consider to be bad health compared to unmarried people," Zheng said.

The reason may have to do with the social support married people receive from their spouses, Zheng said.

Their results appear in the March 2013 issue of the Journal of Health and Social Behavior.