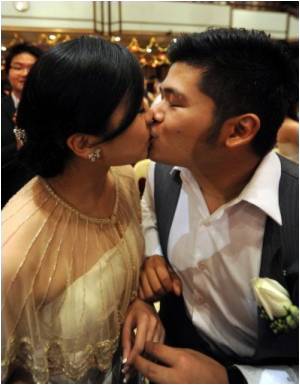 A new report published in the British Medical Journal has suggested that married life provides a number of health benefits, both physically and mentally, and helps you to live longer.

Two researchers from University Hospital of Wales, Cardiff and Cardiff University's School of Medicine analyzed various studies conducted in seven major European countries and found that not only does marriage cheer you up mentally, it also increases your life expectancy by more than 15 percent.

The researchers went on to add that the benefits of marriage increased over time but only if the relationship was a loving and supporting one. One of the major reasons for an improved life was because happily married couple often ate healthy food while they also took better care of each other.


In contrast having many sexual partners or constant divorces are detrimental to the health which could also shorten the lifespan. Stating that commitment is the most important duty for a man the researchers wrote "Commitment seems to provide networks of supportive and helpful relationships, beginning with the spouse or partner, leading to more healthy lifestyles and better emotional and physical health."

Sleep is a barometer of good health in the elderly. Sleep problems in the elderly are controlled by various external and internal factors.
Advertisement
<< Autistic Kid With High Gaming Scores Labeled Cheat on Xbox ...
CDC Says Truvada Should Only be Given to Men at High Risk f... >>

More News on:
How to Save your marriage Divorce: Pros and Cons Is Life Better Staying Single or Getting Married? Health Insurance - India

A-Z Drug Brands in India The Essence of Yoga Loram (2 mg) (Lorazepam) How to Reduce School Bag Weight - Simple Tips Daily Calorie Requirements Noscaphene (Noscapine) Sanatogen Find a Doctor Blood Donation - Recipients Calculate Ideal Weight for Infants
This site uses cookies to deliver our services. By using our site, you acknowledge that you have read and understand our Cookie Policy, Privacy Policy, and our Terms of Use