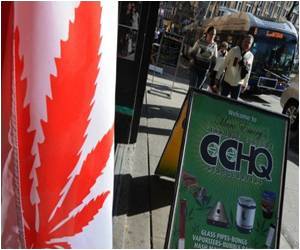 The vending machine at The Daktory in suburban New Lynn had been set up to dispense one gram (0.035 ounce) bags of marijuana for NZ$20 ($16.2) each, one of the campaigners behind the scheme told AFP.

Police said they arrested four people and seized the vending machine, NZ$27,000 in cash and around 700 grams of cannabis, as well as bongs, pipes and other utensils when they raided the property on Thursday evening.

Marijuana-like chemicals can directly inhibit a type of human immunodeficiency virus (HIV) found in late-stage AIDS, reveals study.
Advertisement
"Wherever there is drug offending of any kind, police will act swiftly," he said. "We certainly do not take a softly-softly approach."

Cannabis is illegal in New Zealand although studies show it is the third most popular drug in the country, after alcohol and tobacco.

Speaking to AFP just before Thursday's raid, pro-cannabis activist Julian Crawford said The Daktory was a cannabis club modelled on the cannabis cafes in Amsterdam, where possession of small amounts of the drug has been decriminalised.

"It's basically anonymous, it's a way for people who don't want to have to associate with gangs or criminals to buy cannabis in a safe environment," he said.

Crawford said the Daktory, set up in a former warehouse in an industrial area, was a venue for "like-minded people" to socialise, with a strict age limit of 18 years old.

"It's got lots of couches, there's table tennis, a pool table, darts and games, snack food is available," he said. "It's been set up as an experiment to show how things could operate if marijuana was legalised."

He said organisers were not running the establishment for profit and intended to plough any money made from the scheme into community projects.

Crawford could not be contacted early Friday and it was unclear whether he was among those arrested in the police operation.

Blocking a natural, marijuana-like chemical in the brain helped mice stay thin, even when they were fed a high-fat diet, say researchers.
Advertisement
Advertisement