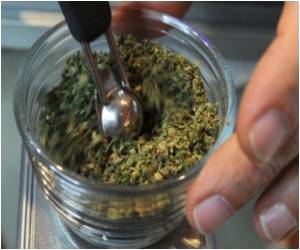 They also showed for the first time the earlier people developed their cannabis habit, the worse the damage.

Scientists from Melbourne's Murdoch Childrens Research Institute (MCRI), Melbourne University and Wollongong University used Magnetic Resonance Imaging (MRI) to scan the brains of 59 people who had been using marijuana for 15 years on average.


The images were compared with scans of 33 healthy people who had never used the drug.

Drug Abuse Screening Test (DAST) is a screening test to find out if you need professional help with 'Drug Abuse' problem. This is only an anonymous self test.
Advertisement
There was a reduction in the volume of white matter of more than 80 per cent in the users studied, Dr Seal said.

While the average age participants started using marijuana was 16, some began as young as 10 or 11 and were more seriously affected.

"This is the first study to demonstrate the age at which regular cannabis use begins is a key factor in determining the severity of the brain damage," News.com.au quoted Dr Seal as telling a foreign news agency.

Cannabis interferes with naturally occurring cannabinoid receptors in the brain.

Diverted Marijuana Use on the Rise Among Adolescents

Nearly three-fourths of adolescents found to have indulged in substance abuse admitted that they had used medical marijuana that had been recommended to someone else.
Advertisement
News A-Z
A B C D E F G H I J K L M N O P Q R S T U V W X Y Z
What's New on Medindia

Selfie Addiction Calculator A-Z Drug Brands in India Blood - Sugar Chart Accident and Trauma Care Nutam (400mg) (Piracetam) Drug - Food Interactions Blood Donation - Recipients Loram (2 mg) (Lorazepam) The Essence of Yoga Find a Doctor
This site uses cookies to deliver our services. By using our site, you acknowledge that you have read and understand our Cookie Policy, Privacy Policy, and our Terms of Use