Many Mutations for Deer Mice 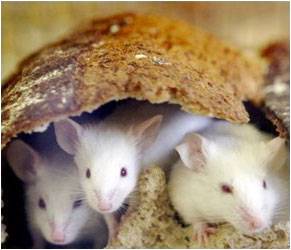 Camouflage is important for the deer mice in the Nebraska Sandhills, literally a matter of life and death.

When they first colonized the region, the dark-coated mice stood out starkly against the light-colored, sandy soil, making them easy prey for predators. Over the next 8,000 years, however, the mice evolved a new system of camouflage - lighter coats, changes in the stripe on their tails and changes in the extent of pigment across their body - that allowed them to blend into their new habitat.

Now Harvard researchers are using their example to answer one of the fundamental questions about evolution - is it a process marked by large leaps - single mutations that result in dramatic change in an organism - or is it the result of many smaller changes that accumulate over time?


As described in a March 15 paper in Science, a team of researchers, including former Postdoctoral Fellow Catherine Linnen, now an Assistant Professor at the University of Kentucky, and led by Professor of Organismic and Evolutionary Biology and Molecular and Cellular Biology Hopi Hoekstra, were able to show that the changes in mouse coat color were the result not of a single mutation, but at least nine separate mutations all within a single gene.
Advertisement
"The findings demonstrate how the cumulative effect of natural selection, acting on many small genetic changes, can produce rapid and dramatic change," Linnen, the first author of the paper, said. "This helps us to understand, from a genetic perspective, the uncanny fit between so many organisms and their environmentsby acting on many small changes, rather than a handful of large ones, natural selection can produce very finely honed adaptations."

Surprisingly, Hoekstra said, that honing occurred in a single gene.

The role of this gene, called agouti, in camouflage was first discovered by Linnen, Hoekstra and colleagues in 2009, and it is responsible for changes in pigmentation in the coats of many animals. Every domesticated black cat, for example, has a DNA deletion in the gene.

What surprised Hoekstra and her team, however, wasn't that the gene was involved, but that each of the nine mutations were tied to a unique change in the animal's coats, that all the new mutations led to more camouflaging color, and that the mutations occurred in a relatively short, 8,000-year timeframe.

"Essentially, it seems as though these mutations - each of which makes the mouse a little lighter and more camouflaged - have accumulated over time," Hoekstra said.

Focusing on these mutations, researchers then examined the DNA of natural populations of the mice to determine whether the mutations are actually beneficial.

While the findings offer valuable insight into the way natural selection operates, Hoekstra said they also highlight the importance of following research questions to their ultimate end.

"The question has always been whether evolution is dominated by these big leaps or smaller steps," she said. "When we first implicated the agouti gene, we could have stopped there and concluded that evolution takes these big steps as only one major gene was involved, but that would have been wrong. When we looked more closely, within this gene, we found that even within this single locus, there are, in fact, many small steps."

Going forward, Hoekstra said, her team hopes to understand the order in which the mutations happened, which would allow them to reconstruct how the mice changed over time.

"For evolutionary biologists, this is exciting because we want to learn about the past, but we only have data from the present to study it," she said. "This ability to go back in time and reconstruct an evolutionary path is very exciting, and I think this data set is uniquely suited for this type of time travel."

Taking the time to understand not only which genes are involved, but which specific mutations may be driving natural selection, Hoekstra said, can give researchers a much fuller picture of not only the molecular mechanisms by which mutations alter traits, but also the evolutionary history of an organism as well.

"By doing this we've discovered all kinds of new things," she said. "While we often think about changes happening in the entire genome, our results suggest that even within a very basic unit - the gene - we can see evidence for evolutionary fine-tuning."

Source: Eurekalert
Advertisement
<< Lack of Milk in Teen's Diet Could Cause Metabolic Syndrome
New Details of the Neurodegenerative Disease Revealed >>

More News on:
McArdle Disease How Do Viruses Mutate and Why Does it Matter?

Squid-inspired 'soft Robot' That Camouflages Itself for Disguise Coming Soon: Researchers
A team of researchers are working to give robots the ability to disguise themselves....

Study Reveals a New Gene Mutation That may Cause Diabetes
Study shows that a single gene mutation may lead to development of type 1 diabetes and other ......

Genetic Mutation That Causes Pompe Disease in Dogs also Responsible for the Same Disease in Humans
Professor Hannes Lohi and his colleagues at the University of Helsinki's Canine Genetics Research .....