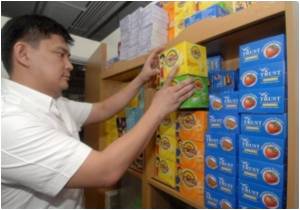 Ayala Alabang, a village in Manila, the Philippines has passed an unusual regulation in today's world, requiring a prescription to buy condoms and birth control pills.

The reason given by the village authorities was that it was regulation 'providing for the safety and protection of the unborn child.' The advertisement and promotion of contraceptives was also forbidden. Breaking this regulation would result in a fine of $115 and imprisonment of one to six months.

"An Armour against pleasure, and a cobweb against infection"  Has the condom withstood the test of time

Condoms invented for preventing pregnancies have now been under intense scrutiny to look at their role in protection against sexually transmitted diseases (e.g. Gonorrhea and 25 other related conditions) and HIV.
Advertisement

'If you want to buy a condom, you need a prescription from a physician with the name of the doctor and the patient on it,' said attorney Luis Sison, village spokesman.


Already there have been questions raised over a proposed law that would enable the government to be responsible for family planning. This has provoked a negative reaction from the Catholic Church that is against any form of artificial contraception and government action to enforce it. This attitude is in spite of the fact that the current population is 94 million, with the growth rate being one of the fastest in this part of the world, at 2 per cent every year.

The village ordinance coming at this point of time would make the matter of family planning more controversial in this populous nation.

Oral contraceptive or birth control pills contain hormones that prevent pregnancy. It is one of the most reliable methods of contraception.
Advertisement
<< Obesity - New Causes Identifed
New Kidney Transplant Policy Could Give Preference to Young... >>