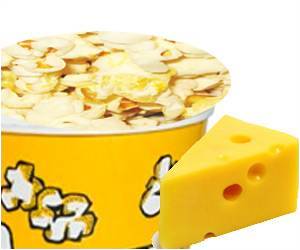 Watson, 59, of Denver, diagnosed with 'popcorn lung' has won a $US7.2 million ($A6.90 million) lawsuit against the manufacturers of this 'household' snack.

Watson began to suffer from respiratory problems in 2007. Watson always felt that his lung problem was due to inhaling the aroma of artificial butter from the microwave popcorn, which he consumed regularly.

The Dark Side of Butter Flavored Popcorn

A recent study has found that a flavorant used in microwave popcorn may elevate risk of Alzheimer's disease.
Advertisement

The doctor treating Watson who was a witness in the case had also felt that inhaling the smell of artificial butter emanating from the popcorn in the microwave and doing so often may have contributed to his lung condition.


Watson blamed the manufacturer of apathy as they had failed to caution consumers against inhaling the buttery aroma which could increase the risk of lung problems. Butter-flavoured popcorn has been in the eye of a storm in recent times, following its alleged connection with  risk of respiratory problems in consumers.

Antioxidant Levels Higher in Popcorn Than Fruits and Vegetables

Popping Popcorn At The Movies Can Make You Fat

Think twice before munching on popcorn while watching your favourite movie in the theatre, as this salt and calorie rich snack can actually make you pile on the pounds.