Man Can Bite Stronger Than Apes! 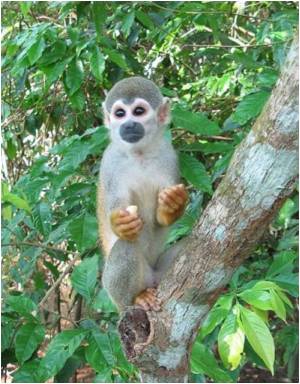 Man biting dogs is news of course. Also that humans can sink their teeth far deeper than their ancestors and ape cousins.

The surprise findings by Australian researchers suggest that early modern humans did not necessarily need to use tools and cooking to process high-nutrient hard foods, such as nuts - and perhaps less tough foods such as meat - but may have lost an ability to eat very tough items, such as tubers or leaves.

Scientists with the University of New South Wales found that the lightly built human skull has a far more efficient bite than those of the chimp, gorilla and orang-utan, and of two prehistoric members of our family, Australopithecus africanus  and Paranthropus boisei.


They found that modern humans can achieve relatively high bite forces using less-powerful jaw muscles. In short, the human skull does not have to be as robust because, for any given bite force, the sum of forces acting on the human skull is much less.

To Ape or Not To Ape? Bridging Missing Links in Medical Research

The study appears in a paper in the journal Proceedings of the Royal Society B by a team led by Dr Stephen Wroe, of the Computational Biomechanics Research Group in the UNSW's School of Biological, Earth and Environmental Sciences. They used sophisticated three-dimensional (3D) finite element analysis to compare digital models of actual skulls that had been CAT-scanned.

The technique, adapted from engineering, provides a highly detailed view of where stresses occur in materials under loads designed to mimic actual scenarios. Wroe's team has previously used this approach to study the jaw mechanics of living and extinct species as varied as the great white shark and the sabre-toothed tiger.

These result calls into question previous suggestions that the evolution of a less robust skull in modern humans involved a trade-off for a weaker bite or was necessarily a response to behavioural changes, such as switching to softer foods or more processing of foods with tools and cooking. It has also been suggested that human jaw muscles were reduced to make way for a larger brain.

"However plausible those ideas may seem they have been based on very little by way of comparative data: for example, there are no actual records of bite force collected from living members of any other ape species, " says Dr Wroe. "It turns out that we don't have a wimpish bite at all - it is very efficient and powerful.

"When we're biting down in vertical plane, at the back of the jaw our bite is about 40-50% more efficient than it is for all great apes. It's even more efficient when biting at the front of the jaw.

"We've only looked at two extinct hominins in this study, but, for our size, we humans are comparable in terms of maximum bite force to these fossil species, which include 'nutcracker man', renowned for its particularly massive skull and jaw muscles. Size matters, but efficiency matters more - and humans are very efficient biters.

"Importantly though, our study focuses on the generation of peak bite forces over short time spans. The jaws of other species may be better adapted to maintain chewing over long periods. This means that although humans are up there with great apes in their ability to quickly crack open a hard item, such as a large nut, or process less tough foods, such as meat, they may be less well adapted to process tough material, such as leaves or bamboo, which requires sustained chewing over a long period".

The study team included UNSW colleagues Toni Ferrara, Darren Curnoe and Uphar Chamoli, along with Colin R. McHenry of the University of Newcastle, and was supported by the Australian Research Council.