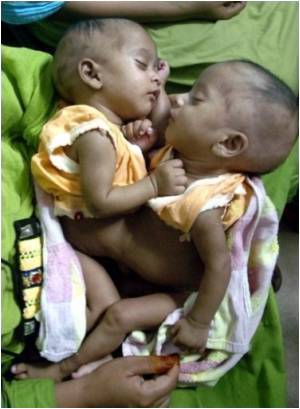 A major survey found 42 percent of children under five in India were underweight and India's Prime Minister Manmohan Singh called malnutrition in the country "a national shame" on Tuesday, as he released the survey.

"The problem of malnutrition is a matter of national shame," Singh said at the launch of the HUNGaMA (Hunger and Malnutrition) Report, which surveyed 73,000 households across nine states.


"Despite impressive growth in our GDP, the level of under-nutrition in the country is unacceptably high. We have also not succeeded in reducing this rate fast enough," the 79-year-old prime minister added.


Singh said the findings of the report by an alliance of non-government organisations were both "worrying and encouraging" for India -- a fast-growing country of 1.2 billion people with the highest number of children worldwide.

The research found the proportion of under-fives who are underweight had declined 11 percentage points in seven years, but Singh said it remained "unacceptably high" at 42 percent.

"We cannot hope for a healthy future with a large number of malnourished children," he said.

India's economy has boomed in the last 20 years since a liberalisation wave in 1991, leading to the perception of a "shining" country emerging from decades of poverty with GDP growth rates of nearly 10 percent in recent years.

Rohini Mukherjee, from the Naadi Foundation, one of NGOs that produced the report, said the wealth created in a country estimated to have 57 billionaires last year had not trickled down fast enough to the impoverished masses.

Measured by the prevalence of malnutrition, India is "doing worse than sub-Saharan Africa," she told AFP, echoing observations made by UN children's agency UNICEF.

This is despite the world's biggest government programme for early childhood development, called the Integrated Child Development Services Scheme, which is seen as riddled with corruption and inefficiency.

The latest data from UNICEF shows that one in three malnourished children worldwide is found in India, with 47 percent of under-threes underweight.

The survey by Naandi and its partners was the "first of its kind" in its scope and methodology, Mukherjee said, leading to results that will help shape public policy.

The last detailed government District Level Health Survey (DHLS) was carried out in 2004.

One of the findings in the new research was that malnourished children in India were rarely hungry, merely badly fed due to widespread ignorance about nutrition among Indian mothers.

"It is very clear that in Africa (malnutrition) is a result of absolute poverty. They are starving," Mukherjee said.

"In our case, to me it seems it is about eating and feeding practices. We have a big gap there.

"Most children we measured have never been hungry, but what the child is eating is almost all carbohydrate."

Far too few Indian women understood the importance of breastfeeding an infant for the first six months, and colostrum -- the vital high-protein form of milk produced just prior to birth -- is often seen as impure and discarded.

"In some places in UP (Uttar Pradesh, northern India) it's a fertility issue," she explained. "The colostrum has to be offered to a local goddess."

As well as malnourishment, the survey of more than 100,000 children and 73,000 mothers measured stunting, when children are short in height for their age.

A total of 58 percent of children under five surveyed were stunted, the survey found, a result of inadequate nutrition for the mother during pregnancy and the child in its early years.