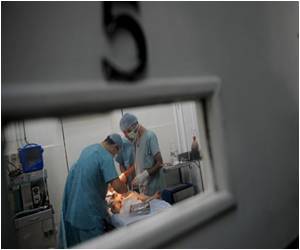 While circumcision reduces the risk of human immunodeficiency virus (HIV) transmission by infected men, there is actually a possible increased risk of infecting female sexual partners while the circumcision wounds heal, warns a new research.

The World Health Organization (WHO) recommends male circumcision (the surgical removal of foreskin from the penis) which reduces HIV acquisition by 50-60%.

Demanding Only Info on Circumcision From Health-Care Providers

Healthcare providers are expected to answer the parents' queries about circumcision, but parents don't want a specific recommendation on the procedure, a poll finds.

"There is a window of a few weeks after circumcision when the risk that an HIV-infected man could transmit the virus to a female partner actually increases," said the study's first author Aaron Tobian, associate professor of pathology at the Johns Hopkins University School of Medicine. "During that time, more HIV-infected men are shedding the virus, and on average they are shedding greater amounts of it, than before circumcision," he noted.


However, scientists report that a new study of HIV-infected men in Uganda has identified a temporary, but potentially troublesome unintended consequence of the procedure: a possible increased risk of infecting female sexual partners while the circumcision wounds heal.

A new study presented at the World AIDS forum on Friday revealed that while circumcision helped prevent AIDS infection among males, it also indirectly benefited women.

The study examined 223 HIV-positive Ugandan men who were medically circumcised. Circumcision reduced the number of HIV-positive men who were shedding the virus more than five-fold over the long term, but it had the opposite effect in the weeks right after the surgery. Case by case, the likelihood of HIV transmission from a newly-circumcised man to his female partner is less than one-tenth of one percent, the researchers estimated.

But with the WHO seeking to circumcise nearly 29 million men, the study projects that this small increase could add up to 17,000 new infections among female partners of newly circumcised HIV-infected men.

"Although we're counseling men not to have sexual intercourse while their wounds are healing, we know that they are," Tobian said.

The solution, he says, may lie in another one of the study's findings. "If the men are on anti-retroviral drugs, this reduces the risk of their shedding the virus by about 90%," he pointed out. The study was published in the journal PLOS Medicine.

Modest increase in the prevalence of circumcision was seen after 2 months with a compensation in the form of food vouchers worth approximately U.S. $9 or $15.
<< Breastfeeding Linked to Lower Risk of Luminal A Subtype of B...
World Failing in Fight Against Antibiotic Resistance: World ... >>