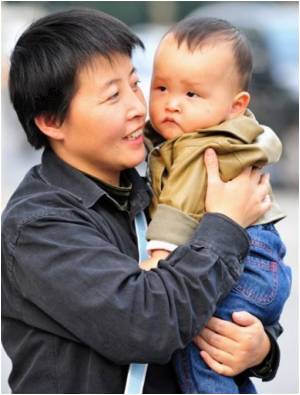 A new study suggests that males have a better chance of bonding with each other when carrying an infant.

The research, carried out among Barbary macaque monkeys, revealed that baby's presence immediately breaks down barriers.

Sudden Infant Death Syndrome is death of a baby, under one year of age that occurs in sleep and cannot be explained.
Advertisement

This study is among the first to show that babies serve as social tools and could explain why human fathers proudly brandish new babies to everyone they meet.


Male macaques who carry babies around with them tend to get higher social status, becoming more popular among their peers.

According to Doctor Rachel Andrew, psychologist who specialises in families and children, men often use their children when they want to impress friends, reports The Scotsman.

Chlamydia is a sexually transmitted disease affecting mainly the genito-urinary system.
Advertisement
"New dads are very proud of their offspring and you often hear men saying they took their baby round to show it off to people. You certainly see that sort of behaviour amongst groups of men with babies, in a similar way to how dads with older children like to compare their child's football skills or how clever their child is," Andrew said.

The study by the German Primate Centre in Gottingen was published in the latest issue of Animal Behaviour.

Autism is a neurodevelopmental disorder typically characterized by impaired social and communication skills combined with repetitive movements.
Advertisement
Advertisement
This site uses cookies to deliver our services.By using our site, you acknowledge that you have read and understand our Cookie Policy, Privacy Policy, and our Terms of Use  Ok, Got it. Close
×