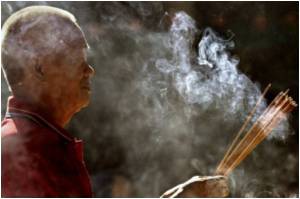 By day he is a BlackBerry-wielding computer analyst, but by night he destroys evil spirits using the Koran. Meet Mazlan Hakim, one of the new generation of Malaysia's "bomohs" or witchdoctors.

As in many parts of Asia, a belief in the supernatural is widespread in Malaysia, but the practice has a different twist in the Muslim-majority country where meddling with the occult is banned under Islam.


Mazlan Hakim is one of a new breed of bomohs who are well-educated, plugged-in to the modern world, and base their ghostbusting and healing on Islamic precepts instead of animist or otherworldly techniques.


The 56-year-old has been a bomoh for 30 years and unlike his non-Islamic counterparts who say they use demons known as "jinn" to do their bidding, he unleashes verses of the Koran to heal the sick and drive out evil spirits.

Dressed in a grey open-necked shirt and brown slacks, Mazlan sips a cafe latte and checks emails on his phone. He looks like a typical business executive but his conversation is anything but routine.

"There are two types of jinn, the Muslim and the non-Muslim jinn," he says.

"The worst is the Muslim jinn as the other jinns come out of the body when I read passages from the Koran, but the Muslim jinn are immune to the Koran so I have to use my telekinetic abilities to pull the demon out."

Mazlan says he has seen spirits since he was 15, but it was only after studying under religious scholars that he sharpened his mental powers and mastered telekinesis, which he claims to demonstrate by moving ping pong balls.

As he closes his eyes and his face scrunches in concentration, one white ping pong ball on the table somehow starts to tremble before moving slowly towards the other.

"This is not a parlour trick, I use my mind to chase out the spirits that have possessed people, this and the Koran give me success," he says.

"I have an almost 100 percent success rate and most of my clients are rid of the spirits or curses that plague them."

Such claims would seem to be at odds with Islam, and the religious authorities in Malaysia who are notorious for their hardline enforcement of moral and spiritual rules.

But Islamic bomohs are tolerated and even approved of, as a better alternative to old-style black magic practitioners who still do a brisk trade with their concoctions and incantations.

Local magazines are filled with advertisements for "love potions" and elixirs to "stop wandering spouses" and "get even with the neighbours."

Occult researcher Azizah Ariffin says Malays have long practiced the dark arts, originally derived from animist practices which were reinforced by Hindu beliefs before the arrival of Islam in the region.

"Black magic has been a part of Malay life for many centuries as the village bomoh still held on to animist beliefs and rites of earlier religions to cure people," she says.

"Upon the arrival of Islam, the Imam took care of the people's spiritual welfare."

"It was not until the 1980s that the Islamisation of the bomohs began, and only recently have many witchdoctors begun using Koranic verses to cure people instead of rituals."

Azizah says old-style techniques like burning aromatic resin to summon the jinn and commune with spirits, and brewing up magical medicines, are now less in favour.

"The Islamic bomohs are the ones who use the Koranic verses and they do no harm but help to cure ailments and remove black magic spells. It is the bomohs who don't use the Koran that are of concern because only some do good while others are the real black magic practitioners using animist rituals," she adds.

Leading Islamic cleric Mohammad Tamyes Abdul Wahid says although black magic is against Islam, it is widely used in Malaysia by those intent on controlling spouses or cheating others out of their possessions.

"We must differentiate between bomohs who use the words of the Koran and try to help heal people using these holy verses and phrases, compared to those who try to seek the help of jinns and ghosts to gain favour," he says.

"There has been a shift as many realise through education that these bomohs using spirits are evil compared to those using the Koran to help heal and do good things."

One example is Haron Din, a senior figure in the conservative Islamic party PAS, who is one of Malaysia's best-known bomohs and yet still part of the country's religious establishment.

Three decades ago he opened a clinic outside Kuala Lumpur where he and a group of faith healers exorcise demons and spirits using Koranic verses, and hundreds still flock there every day.

Mohammad Tamyes wants the government to introduce laws against black magic practitioners who use their skills for "evil purposes".

"Islam is against these practitioners who try to invoke the help of such beings in carrying out spells and attacks on people, this cannot be condoned," he tells AFP.

"Laws are needed to stop the practice of such black magic, but of course it is not easy to legislate against what you can't see."

Science, Superstitions and Solar Eclipse
Solar eclipse is traditionally linked to myths and superstitions. However the trends are slowly shifting, thanks to the scientific community.
READ MORE

Nagpur Doctors Take The Path Of Superstition - For Good Health of People
'Doctors treat, but God heals,' so goes the adage. But in an amusing incident, doctors in Nagpur invoked the Gods by performing a fire ritual for the good health and longevity of the
READ MORE