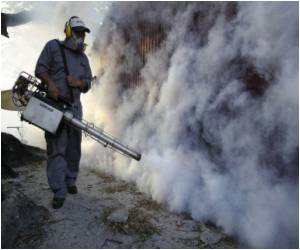 Malaysia said Monday its dengue fever death rate spiralled 53 percent this year, but backed away from a controversial trial of releasing genetically modified mosquitoes to wipe out the disease.

"There was a major rise in deaths due to dengue fever, with 107 deaths so far this year compared to 70 deaths for the same period last year," said deputy premier Muhyiddin Yassin.

Muhyiddin said the majority of the deaths could have been avoided, and urged the public to take action to eradicate the Aedes aegypti mosquitoes -- which spread dengue -- from their homes and workplaces.


"We have identified 19 hotspots throughout the country where the disease is prevalent, and action is being taken to tackle the situation in these areas," he said.

Mosquito-borne diseases, like malaria, filaria, dengue, etc are common in places conducive of mosquito breeding. Swamps, ponds and stagnated drainage provide optimal breeding ground for mosquitoes.
Advertisement
However, Muhyiddin was cool on a plan to release genetically modified mosquitoes designed to combat dengue fever, in a proposed landmark field trial that has come in for criticism from environmentalists.

In the first experiment of its kind in Asia, 2,000-3,000 male Aedes aegypti mosquitoes were to be released in two Malaysian states in October or November if the plan had won government support.

The insects in the study have been engineered so that their offspring quickly die, curbing the growth of the population in a technique researchers hope could eventually eradicate the dengue mosquito altogether.

Females of the Aedes species are responsible for spreading dengue fever.

Muhyiddin said the project would not be implemented "at the moment".

"Seemingly it is quite an interesting (solution) to deal with such a problem but I think... not until and unless every aspect of research being carried out is clinically tested and... environmental issues have been addressed," he said.

"And of course most importantly at the end of the day, it is endorsed by international organisations -- that it is something we can apply for the purposes of dealing with the epidemic."

The development is a boon for environmentalists who were were concerned the GM mosquito could fail to prevent dengue and could also have unintended consequences.

Critics have said the larvae will only die if their environment is free of tetracycline, an antibiotic commonly used for medical and veterinary purposes.

The field trial for the GM anti-dengue mosquitoes was developed by a British-based insect bio-tech company, Oxitec, and was to be undertaken by the Malaysia's Institute for Medical Research, an agency under the health ministry.

Dengue infection leads to a sudden onset of fever with severe headaches, muscle and joint pains, and rashes.

The virus has historically been found in tropical regions, particularly in urban and semi-urban areas, but has spread in recent years to colder and higher places and is now endemic in more than 100 countries.

South China Hit By Dengue Outbreak Ahead of Asian Games

An outbreak of dengue fever has hit south China ahead of the upcoming Asian Games, with health authorities battling to contain the epidemic before the event opens, state media said Friday.
Advertisement
Advertisement