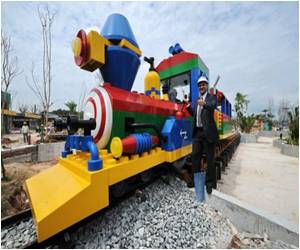 An eager crowd of 10,000 people visited the 76-acre theme park in Johor state -- across a narrow waterway from Singapore -- which features a variety of rides and thousands of Lego models made out of the popular toy bricks.

The largest Legoland in the world opens Saturday in Florida with the children's haven having to compete in one of the world's busiest hubs for amusement parks.
Advertisement

The visitors were greeted by costumed characters as confetti and balloons were launched into the air amid a special performance by a marching brass band from Denmark.


Back in 2011 earthmovers had flattened a vast expanse of oil palm-covered hills to make way for the 31-hectare theme park, one of the main attractions of a new city and economic zone called Iskandar Malaysia.

Malaysia Has Been Declared a Top Tourist Spot for Muslims

Malaysia has been declared a top tourist spot for Muslims, according to an independent study. The study came to the conclusion based on the number of trips by Muslims, and declared
Advertisement
Malaysia launched the economic hub as part of a five-year, 200 billion-ringgit ($65 billion) spending plan to transform the economy in the sleepy Johor state.

With the opening, the theme park will be the sixth of its kind in the world after those in Denmark, Britain, California, Florida and Germany.

Legoland Malaysia is divided into seven sections such as "Lego Kingdom", "Lego City" and "Lego Technic".

Most rides are for children under the age of 12, but the theme park also has a variety of attractions for the whole family like the "4D Lego Studios" and the "Miniland" -- featuring recreated Asian landmarks like Cambodia's Angkor Wat and Petronas Towers, the world's tallest twin towers.

John Jakobsen, managing director of Legoland Parks for Merlin Entertainments, expects the new park to be a "great success" owing to its proximity to Singapore, which attracted 13.2 million tourists last year.

"It's incredible to see Asia's first Legoland Park come to life," he said.

It is targeting as many as two million visitors a year from markets across Asia including India China and Hong Kong as it rolls out new attractions.

Iron Intake Calculator Find a Doctor Hearing Loss Calculator Calculate Ideal Weight for Infants Accident and Trauma Care Noscaphene (Noscapine) Find a Hospital Daily Calorie Requirements Blood - Sugar Chart Nutam (400mg) (Piracetam)
This site uses cookies to deliver our services. By using our site, you acknowledge that you have read and understand our Cookie Policy, Privacy Policy, and our Terms of Use