Malaria can be Controlled With Intermittent Drug Treatment 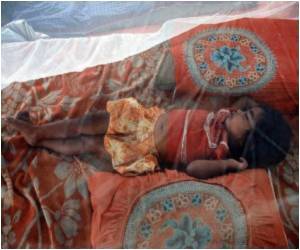 Intermittent preventive treatment along with use of bednets during sleep hours proved to be helpful in controlling malaria.


Each trial involved more than 3,000 children who were treated intermittently with anti-malarial drugs sulphadoxine pyrimethamine and amodiaquine.

Mosquito-borne diseases, like malaria, filaria, dengue, etc are common in places conducive of mosquito breeding. Swamps, ponds and stagnated drainage provide optimal breeding ground for mosquitoes.
Advertisement
The intermittent preventive treatment was initially recommended for pregnant women and has recently been extended to include infants and children.

However, previous studies in children were carried out in countries where the use of insecticide treated bed nets - a main tool used for malaria control in most of sub-Saharan Africa - was relatively low.

Therefore, the findings of these two trials are important as they demonstrate the additional benefit that intermittent preventive treatment can confer on standard malaria control practice.

The authors of the Burkina Faso study wrote that the results offered 'strong evidence to support the integration of (Intermittent preventive treatment for children) into malaria control strategies in areas of seasonal malaria transmission'.

The authors of the study in Mali too arrived at a similar conclusion, saying "These findings indicate that the Intermittent preventive treatment could make a valuable contribution to malaria control in areas of seasonal malaria transmission alongside other interventions."

The research was led by Diadier Diallo from the London School of Hygiene and Tropical Medicine; Amadou Konate from the Centre National de Recherche et de Formation sur le Paludisme in Ouagadougou; and Alassane Dicko from the Malaria Research and Training Centre, Mali.

A third trail carried out in the Gambia found that administering intermittent preventive treatment to children by community-based, volunteer village health workers was more effective and less costly than delivery by reproductive and child health teams run by the Ministry of Health.

The studies are published in this week's PLoS Medicine.

Greenhouse effect causes excessive heat to build up in the earth's atmosphere causing global warming and affects the environment and health.
Advertisement
<< RNA can Reverse Life Cycle of Ovarian Cancer Tumor
US Plans to Limit the Amount of Perchlorate in Water >>