Making A Bed Can Be A Hazard 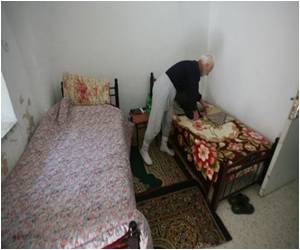 What do a blood clot in the wrist and a tight fitted bed sheet have in common? Both are associated with a condition called sheet fitting palsy.

True to its name, the palsy is reported in those who spend a long period of time repeatedly trying to pull a fitted bed sheet over the corner of a mattress. But it has also been reported in basketball players and in those who do push-ups as exercise.

Steroid pills are the most effective known treatment for recovering full strength in the facial muscles for people experiencing first-time symptoms of Bell's palsy, a recent guideline suggests.
Advertisement

The injury is caused by the continuous flexing movement of the wrist and results in a tiny stroke in the artery to the hand. The resulting clot cuts off blood flow to the median nerve and produces symptoms that include numbness or weakness.

The mechanism by which magnesium sulfate reduces cytokines production has been discovered by scientists.
Advertisement
The case involved a fit and active 73-year-old woman, who was a bit miffed last fall when she had to depend on her granddaughter to help her with some housework. No matter how hard she tried, she couldn't slip the last corner of a fitted sheet over a mattress. Sometimes she noticed a 'pins and needles' feeling in her hand, but didn't think anything of it. After shaking her hand for a while, the numbness would go away.

A few weeks later, facing the fitted sheet task without her granddaughter to help her, the woman tried for some time to move the sheet over the mattress without success. When she moved her hand from the sheet her thumb dropped down, limp. That's when she called her doctor, Mary F. Lyles, M.D.

On examination, Lyles saw that her patient had lost most of the ability to perform simple tasks such as tying a shoelace or buttoning a sleeve with her right hand. Suspecting acute carpel tunnel syndrome, Lyles called on neurologist Walker to perform nerve conduction studies and image the hand using ultrasound. Few physicians have seen what Walker saw in the study. "High resolution color flow Doppler showed a rare persistent median artery that had blood flow in it in the forearm, but not at the wrist where it was next to a swollen, injured, median nerve." The patient is among the five percent of people who have persistent median artery, a vessel that usually disappears after birth.

Shortly after her tests, the patient underwent surgery to relieve some of the pressure on the nerve, but her limp thumb persisted. The woman's surgeon advised her to strengthen the thumb by going through the motions of performing her everyday activities. Even if a patient can't do them, trying the daily tasks can help. Little by little, the strategy worked. At first she was successful picking up a paper clip. When she could open and close a chip clip, she knew she was back to normal. It had taken nearly a year for the nerve in the wrist to grow the new pathways that allowed her thumb to function.

For those with persistent median artery, repetitive motion can mean trauma to the wrist and lead to severe symptoms of carpal tunnel syndrome. And something as simple as making a bed can be a hazard, especially if the fitted sheet does not fit.

Meet The Man Who Beat Cerebral Palsy To Become a Doctor

Here's a success story of a man who overcame cerebral palsy to become a homeopathic doctor.
Advertisement
<< Redesigned Jawbone 'UP' Fitness Wristbands Tailored to Achie...
Men Are Less Patient Than Women While Waiting In Queues >>

Felicitation Of Achievers With Cerebral Palsy In Mumbai

Making A Bed Can Be A Hazard Personalised Printable Document (PDF)