Magnetic Bacteria Could be Used to Deliver Drugs to Tumors 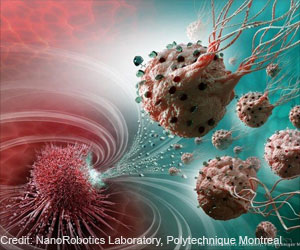 Magnetic bacteria are a promising vehicle for more efficiently delivering tumor-fighting drugs, say researchers. They reported their results in the August 2016 issue of Nature Nanotechnology.

One of the biggest challenges in cancer therapy is being able to sufficiently deliver chemotherapy drugs to tumors without exposing healthy tissues to their toxic effects. One way researchers have attempted to overcome this is by developing nanocarriersextremely small particles packed with drugs. The nanocarriers are designed so they're only taken up by cancer cells, thereby preventing the drugs from being absorbed by healthy tissues as they travel through the body's circulation.

Breast cancer if detected early can be completely cured. Mammography is used to screen women for breast cancer.
Advertisement
‘Magnetic bacteria deliver drugs to tumors deeper in the body.’

Yet while nanocarriers do a good job protecting healthy tissues, the amount of drug successfully delivered to tumors remains low. The main reasons for this shortcoming are that nanocarriers rely on the circulation system to carry them to the tumor, so a large percentage are filtered out of the body before ever reaching their destination. In addition, differences in pressure between the tumor and its surrounding tissue prevent nanocarriers from penetrating deep inside the tumor. As a result, nanocarriers aren't able to reach the tumor's hypoxic zones, which are regions of active cell division that are characterized by low oxygen content.


"Only a very small proportion of drugs reach the hypoxic zones, which are believed to be the source of metastasis. Therefore, targeting the low-oxygen regions will most likely decrease the rate of metastasis while maximizing the effect of a therapy," says Sylvain Martel, Ph.D., Director of the Polytechnique Montréal NanoRobotics Laboratory and lead researcher of the study.

What are your chances for developing some common cancers in your lifetime - find out now.
Advertisement
Martel and his research team were attempting to develop robotic nanocarriers that would travel to hypoxic zones when they realized nature may have already created one in the form of a bacteria called magnetococcus marinus or MC-1. MC-1 cells thrive in deep waters where oxygen is sparse. In order to find these areas, the bacteria rely on a two-part navigation system. The first part involves a chain of magnetic nanocrystals within MC-1 that acts like a compass needle and causes the bacteria to swim in a north direction when in the Northern Hemisphere. The second part consists of sensors that allow the bacteria to detect changes in oxygen levels. This unique navigation system helps the bacteria migrate to and maintain their position at areas of low oxygen.

With funding support from NIBIB and others, Martel's research team conducted a series of experiments to show that the bacteria's unique navigation system could be exploited to more efficiently deliver drugs to tumors.

In an initial experiment, mice that had been given human colorectal tumors were injected with either live MC-1 cells, dead MC-1 cells, or as a control group, non-magnetic beads (roughly the same size as the bacteria). The injection was made into the tissue directly adjacent to the tumors after which the mice were exposed to a computer-programmed magnetic field, meant to direct the cells or beads into the tumor. Upon examination of the tumors, the researchers found minimal penetration of the dead bacterial cells and the beads into the tumor, whereas the live bacterial cells were found deep within the tumor and especially in regions with low oxygen content.

"When they get inside the tumor, we switch off the magnetic field and the bacteria automatically rely on the oxygen sensors to seek out the hypoxic areas," says Martel. "We constrain them to the tumor and then let nature do the rest."

Next, the researchers wanted to see whether attaching vesicles loaded with drugs to the cells would affect their movement into the tumors. They attached approximately 70 drug-containing vesicles to each bacterial cell. The cells were then injected into another set of mice with colorectal tumors and exposed to the magnet. After examining the tumors of those mice, the researchers estimated that on average, 55% of the injected bacterial cells with attached vesicles made it into the tumor. For comparison, some researchers estimate that only approximately 2% of drugs delivered via current nanocarriers make it into tumors.

"This proof-of-concept work shows the potential to tap into the intricate and optimized cell machinery of single celled organisms such as bacteria," said Richard Conroy, Ph.D., director of the Division of Applied Sciences and Technology at NIBIB. "The ability to actively and precisely target drug delivery to a tumor will help reduce side effects and potentially improve the efficacy of treatments."

The next step for Martel's team is to determine the effects of the drug-loaded bacterial cells on reducing tumor size. They would also like to test whether the bacteria can be used to deliver other types of cancer-killing medicines such as molecules that instruct the immune system to attack tumors.

In addition, the team is working to expand the types of tumors the bacteria could be used for. Currently, the bacteria have to be injected very close to the tumor because, if injected into arteries, the excessive blood flow and the distance needed to travel would impact the number of bacteria that reach the tumor. This limits the drug delivery approach to cancers that are easily accessible such as colorectal, prostate, and potentially breast cancer. However, Martel's team has shown in animals that they can transport the bacteria through arteries and sufficiently close to the tumor by first encapsulating them in magnetic carriers and propelling them by the magnetic field of an MRI scanner. The bacteria can then be released from the carriers, like torpedoes from a submarine, once close to the tumor. This multi-step approach could potentially open the door for using the bacteria to deliver drugs to tumors deeper in the body.

Martel says that preliminary test results of the bacteria in mice and rats and the fact that the bacteria die within 30 minutes of being injected, suggest that they could potentially be safe in humans.

"These bacteria are really the perfect machine. They replicate, they're cheap, and we can inject hundreds of millions or more at a time," says Martel.

Cancer, is the second most leading cause of death worldwide. Cancer is not just one disease but many diseases. There are more than 100 different types of cancer. Take this quiz on and test how much you know about cancer.
Advertisement
<< Individual Beliefs can Worsen Insomnia
Dialysis Used More Liberally in US Compared To Other Develop... >>

Indian Medical Journals Noscaphene (Noscapine) Blood Donation - Recipients A-Z Drug Brands in India Diaphragmatic Hernia Drug - Food Interactions Find a Hospital Blood - Sugar Chart How to Reduce School Bag Weight - Simple Tips Accident and Trauma Care
This site uses cookies to deliver our services. By using our site, you acknowledge that you have read and understand our Cookie Policy, Privacy Policy, and our Terms of Use