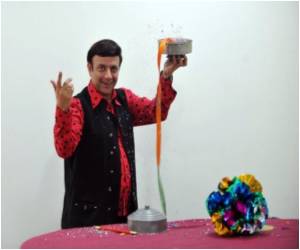 As the magicians work to improve their art, a study of magician duo Penn and Teller's 'cups and balls' trick has advanced our understanding of how observers can be misdirected and will aid magicians.

"Cups and Balls," a magic illusion in which balls appear and disappear under the cover of cups, is one of the oldest magic tricks in history, with documented descriptions going back to Roman conjurors in 3 B.C.


"But we still don't know how it really works in the brain," said Macknik, "because this is the first, long overdue, neuroscientific study of the trick."
Advertisement
The discovery concerns the way magicians manipulate human cognition and perception. The "Cups and Balls" trick has many variations, but the most common one uses three balls and three cups. The magician makes the balls pass through the bottom of cups, jump from cup to cup, disappear from a cup and turn up elsewhere, turn into other objects, and so on.

"The transparent cups mean that visual information about the loading of the balls is readily available to the brain, yet still the spectators cannot see how the trick is done!" said Martinez-Conde.

Magicians have performed and systematically developed the art and theory of this illusion for thousands of years, but each new generation of conjurers offers new insights and hypotheses about how and why it works for the audience.

Here the scientists turned the power of the scientific method to the illusion. The experiments tracked when and where observers looked during video clips portraying specific element of the performance, filmed by a NOVA scienceNOW TV crew.

By quantifying how well observers tracked the loading and unloading of balls with and without transparent cups, the scientists determined that some aspects of the illusion were even more powerful at controlling attention than aspects originally predicted by the magician.

The end result is that cognitive scientists now have an improved understanding of how (and by how much) observers can be misdirected. In addition, this knowledge can help magicians further hone their art.

The study was published, as part of the launch of PeerJ, a new peer reviewed open access journal.

Witchcraft
Harry Potter has given a new lease of life to witchcraft. Witchcraft uses sorcery and works with ......

Magical Millets for Your Health
Millets are far more nutrient dense than wheat and rice. They are inexpensive and tasty too. ......