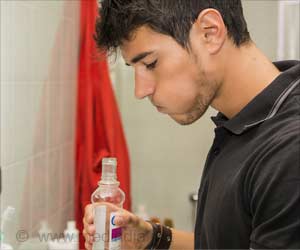 Magic mouthwash can effectively treat pain related to mouth sores caused by radiation therapy for cancers of the head and neck, reports a new study.

'Magic mouthwash,' an oral rinse containing diphenhydramine, lidocaine, and antacids, significantly reduced pain from oral mucositis, mouth sores, in patients receiving radiation therapy for cancers of the head and neck when compared to placebo. These were the findings of a multi-institution, randomized, double-blind, placebo-controlled, phase III clinical trial, led by Robert Miller, M.D., an emeritus Mayo Clinic radiation oncologist. Dr. Miller and his colleagues published their findings in the JAMA.

"Our group published a study in 2012 showing that an oral rinse of doxepin reduced oral mucositis-related pain, compared to placebo," says Dr. Miller. "However, there were no large randomized controlled trials studying the potential benefits of magic mouthwash."


Dr. Miller and his colleagues studied 275 patients between November 2014 and May 2016. They found that pain related to oral mucositis was significantly less following both doxepin and magic mouthwash rinses versus placebo. They also found that both doxepin and magic mouthwash rinses were well-tolerated by patients.
Advertisement
"Radiation therapy may cause mouth sores because it is designed to kill rapidly growing cells, such as cancer cells," says co-author, Terence Sio, M.D., a Mayo Clinic radiation oncologist in Arizona.

"Unfortunately, healthy cells in your mouth also divide and grow rapidly, and may be damaged during radiation therapy, which can cause discomfort. We're glad to have identified a proven method to help treat the discomfort of this side effect."

Source: Eurekalert
Advertisement
<< Every Third Middle-Age Indian Suffers from Lack Of Libido
Diabetes Drug to Lessen the Risk of Heart Disease in Non-dia... >>

Mouth Ulcers
Mouth ulcer or a sore in the mouth is breakage of the mucosal layer in the mouth. Local traumatic .....

Mouthwash
Just like toothpastes, mouthwash or mouth rinse has become a substantial part of our daily life, ......

Soligenixs Drug Shows Potential to Treat Oral Mucositis in Phase 2 Trial
Oral Mucositis is a devastating side effect of Chemo-Radiation Therapy (CRT) which is used for the ....