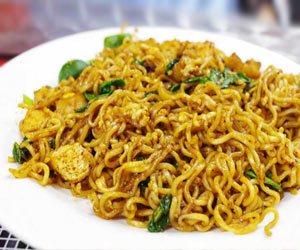 Reliance Industries has decided to temporarily withdraw all brands of instant noodles from its retail stores across India due, primarly, to health concerns.

Sources in the company said the step of going beyond a piecemeal approach of being selective in removing just spme selected brands was based on the wellbeing of customers, while also looking at the interests of the 11 partners of the company whose noodles are stocked in its stores.

Lead levels were within the food regulators' permissible limits in Maggi samples collected from Mumbai and Thane in Maharashtra.
Advertisement

"We believe that the uncertainty is unwarranted and undeserved. But it merits the launch of a robust, nationwide process of reassuring ourselves and serve our valued stakeholders," said Damodar Mall, Reliance Retail's chief executive of value formats in consumer business.


Company sources said these brands had already been removed from the shelves and returned to the distribution centres, labeled as 'Not For Sale'. Designated food safety officers had been duly informed, they said, adding they wanted to remain 100 percent compliant with the norms.

Reliance Retail runs over 2,620 stores across 200 cities in India.

Action Against Maggi Noodles Will be Taken Only After Test Reports Are In: Paswan

The Food and Consumer Affairs Minister Ram Vilas Paswan said that the Indian government had taken suo motu cognizance of the matter and ordered checks.
Advertisement
Advertisement
This site uses cookies to deliver our services.By using our site, you acknowledge that you have read and understand our Cookie Policy, Privacy Policy, and our Terms of Use  Ok, Got it. Close
×