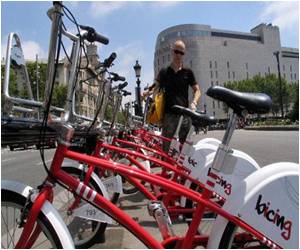 Madrid's shared electric bicycle scheme, launching this month, can change the lives of citizens, say politicians; while others say it can be a danger, too.

The Spanish capital is seeking to match rival Barcelona, as well as Paris and London, by providing hundreds of bicycles for public hire -- with the added feature of electric motors to help riders up slopes.

The self-service stands that will hold the 1,500 electric bicycles started appearing around the centre of the Spanish capital this week, but the planned May 1 start has been pushed back to an unconfirmed date.


Taxi driver Juan Gutierrez, 54, said he heard about the project just a week before the stands started going up. He shook his head at the thought of sharing the narrow streets with more bicycles.
Advertisement
"People in Madrid value their lives too much to get on a bicycle here. It is very dangerous," he said.

"If the car that knocks you down doesn't kill you, then the one behind it will."

Across the road, passerby Antonio Martin, 78, looked curiously at a new stand, one of 120 being set up in the first phase of the "BiciMad" project.

"I think it's great, for the environment and for traffic and everything," he said. "Above all, when the weather is nice, this will be fantastic."

The city hall has launched an "awareness campaign" ahead of the bicycle deployment, and Madrid's conservative Popular Party Mayor Ana Botella has conceded that adjustments will be necessary.

"Drivers, pedestrians and cyclists have to make an effort to share public space for the benefit of all and mutually respect one another," the mayor said in April.

Pascual Berrone, from Madrid's IESE business school, meanwhile, said Spaniards are keen to get on their bikes but do appear reluctant to ride in Madrid due to safety concerns.

Sales of bicycles in Spain recently surpassed those of cars, he said -- but in central Madrid very few people use their bikes because of a lack of joined-up, dedicated cycle lanes and other infrastructure.

"There are places it is quite easy to ride a bike, but other areas where it is extremely dangerous. It is often scary to ride a bicycle in Madrid," he said.

The "BiciMad" service follows similar schemes in Spanish cities such as Barcelona, as well as Paris's "Velibs" and London's so-called "Boris bikes".

Built and installed by Spanish Basque firm BonoPark under a 25-million-euro ($35 million) contract, the Madrid bikes will have electric motors that help propel them when pedalled.

It remained to be confirmed how much users would have to pay to hire them.

The city hall said bicycle use in Madrid increased by 17 percent from 2012 to 2013. Madrid currently has just over 300 kilometres (186 miles) of cycle lanes and has promised 70 kilometres more.

"For years, riding bicycles in the centre of Madrid has been a dream that few people believed in," said Mayor Botella last month.

"Today it is a real alternative to using a private vehicle, a possibility that complements public transport."

The city hall believes the bike-share scheme "will change driving habits and improve the coexistence between the different forms of transport".

In the meantime, it said police have been cracking down on bike-related traffic violations. Officers have sanctioned dozens of cyclists and hundreds of drivers over recent weeks.

"Madrid has a good basis but is lacking the infrastructure to go with it and needs to educate drivers. Madrid has improvements to make," said Berrone.

"But if you accept that it can improve the traffic flow in the city and help people be in better health and breathe better air, then that is an investment you have to make."

Electric Bicycle-Share Offered by Madrid from May
Madrid's first public bike-hire scheme will be available from May 1, the company providing 1,500 ......

Bicycle Sharing Scheme in London Has Had Positive Health Effect
Authors of a new research are suggesting that the potential benefits of cycling "may not currently ....