Macedonian Prostitutes And Sex Workers Demand Decriminalization of Their Profession

In an attempt to demand decriminalization of their profession, prostitutes and sex workers marched along the streets of Skopje in a rare public protest.

Carrying red umbrellas, a symbol of the global fight for sex workers' rights, about 100 prostitutes and human rights activists marched in silence to call for "respect of rights and better conditions" for prostitutes in the Balkan country.

"We appeal for sex workers' rights to be respected and their work conditions improved," said Borce Bozinov of the Star-Star non-governmental group which organised the protest.


No incidents were reported during the march, the first of its kind in Macedonia, a small landlocked nation of 2.2 million.

Prostitution is illegal in this highly traditional and conservative society and sex workers say they are often exposed to violence and hate crimes that go unpunished.

One of the marchers who refused to reveal her name, said she has suffered "physical, verbal and sexual violence daily, but I cannot report it."

The marchers called for new laws to decriminalise prostitution and enable health and social security for sex workers to be introduced.

But the attempt to legalise prostitution in early 2000s failed as the parliament rejected a draft bill proposing such measures.

Minimum Age for a Prostitute Raised to 21 in Amsterdam
In a bid to protect sex workers the city of Amsterdam has said it will raise the legal age of prostitutes from 18 to 21 and announced plans to close brothels during the early morning hours.
READ MORE 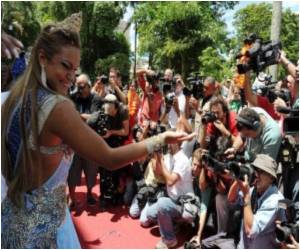 Learning English for World Cup Are Prostitutes
Officials say that sex workers in Brazil's city of Belo Horizonte, which will host World Cup 2014 semi-finals, are being offered free English lessons to help them welcome the tourist onslaught.
READ MORE

Peer-Based Programs Among Female Prostitutes Successful in Reducing HIV Cases in India
A new study has revealed that peer-based programs in sex workers and their clients have been pretty successful in reducing syphilis, HIV and other STI cases in India.
READ MORE