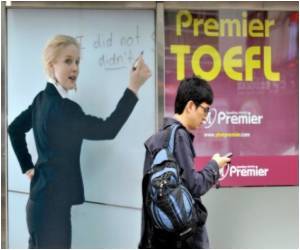 The Beijing Administration for Industry and Commerce said in a recent statement that businesses were given an April 15 deadline to rectify such ads, along with any that excessively promote "foreign" things.

Advertisers are developing digital posters that will recognise people's faces and respond by flashing ads that are according to their tastes.
Advertisement

It gave no details on which "foreign" things were deemed objectionable.


Such promotions help create a politically "unhealthy" climate, it said.

A new research study released by the Australian Food and Grocery Council (AFGC) announces that only a small percentage, about 2.4 per cent, of food advertisements are targeted at children.
Advertisement
Newly forbidden words include "supreme", "royal", "luxury" or "high class", which are widely used in Chinese promotions for houses, vehicles and wines, it said.

Chinese officials are struggling to cool criticisms over a widening income gap at a time when high inflation has put economic pressure on the country's hundreds of millions of low-income farmers and industrial workers.

Premier Wen Jiabao said earlier this month that "resolving unfair income distribution" would be a major objective under a 2011-2015 state economic plan.

The brokerage firm CLSA Asia-Pacific Markets predicted in January that China would become the world's largest luxury goods market by 2020, accounting for 44 percent of worldwide sales and bigger than the entire global market is now.