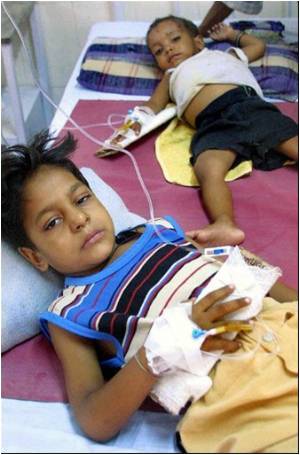 Around 34 people have been admitted to local hospitals after an outbreak of gastroenteritis in Ludhiana.

Most of the cases have been registered from the Niwasi Bihari Colony, Sherpur Colony and Gaspura area of the district, where, according to the authorities, the disease has broken out mainly due to waterlogging.

Many people have died due to the disease.


"The family members of poor people who have died, should be provided some compensation. These people have no one else to support them. Government should also clean up the area and take action against those who sell rotten vegetables and fishes. Blocked drains and dirty water should be cleaned," said M. areek, a resident.

A quick and simple First Aid guide on how to administer treatment for Gastroenteritis.
Advertisement
Ramesh Tiwari, a resident of the Niwasi Bihari Colony, also said that the waterborne disease broke out due to continuous waterlogging in the area.

Local administration has also confirmed the outbreak, and has said that the numbers of the cases are increasing every day.

"Almost five to six cases are coming every day. Most of them are coming from a particular area. Symptoms of the disease are that one suffers from vomiting, dysentery, and this can lead to dehydration," said Kuldeep Singh, Assistant Commissioner, Ludhiana.

"Our volunteers have already opened up a camp in that area and doctors are available there 24 hours. All the serious cases are being referred to the civil hospital," he added.

Medical camps have been opened up in the affected areas and over 300 people suffering from the illness are being treated.

Gastroenteritis or Stomach Flu or Gastric flu is highly contagious and infectious inflammation of stomach, ...