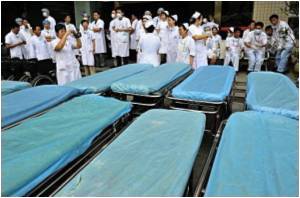 Intern doctors in Lucknow have gone on a hunger strike to demand higher stipend.

Carrying placards and banners, they took part in a protest march against the local administration.

The interns claimed that their counterparts in Bihar and West Bengal were paid a stipend of Rupees 7000 and Rupees 13000 respectively, while they received just rupees 1950. Amit Rastogi, an intern, said the fast unto death would persist with it till their stipend is raised.


"Only when our monthly stipend is raised to Rupees 8,900, then we will call off this hunger strike. Else we are determined that we will move from here only if we are unconscious or not in our senses," Rastogi added.

Meanwhile, Lucknow District Magistrate Anil Sagar said the interns demands have been discussed and necessary action would be taken.

Patients Bear the Brunt of Doctors Strike in Patna

Patients are facing the brunt of a three-day strike by junior doctors at the Patna Medical College Hospital (PMCH) here.
Advertisement

A pay strike by doctors at government hospitals at Nigeria's main city entered a third day Wednesday but the authorities accused the strikers of blackmail .
Advertisement

Weight loss is a struggle for many individuals. This can be achieved simply by understanding the fullness ...