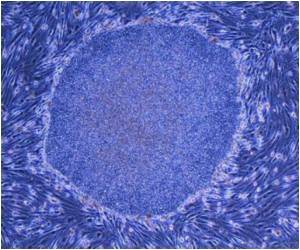 A new study has found that a protein known for turning on genes to help cells survive low-oxygen conditions also slows down the copying of new DNA strands, thus shutting down the growth of new cells.

The discovery by Johns Hopkins researchers has wide-ranging implications, given the importance of this copying - known as DNA replication - and new cell growth to many of the body's functions and in such diseases as cancer.

"We've long known that this protein, HIF-1a, can switch hundreds of genes on or off in response to low oxygen conditions," Gregg Semenza, MD, Ph.D., a molecular biologist who led the research team said.


"We've now learned that HIF-1a is even more versatile than we thought, as it can work directly to stop new cells from forming," he said.

With his team, Semenza, who is the C. Michael Armstrong Professor of Medicine at the Johns Hopkins University School of Medicine's Institute for Cell Engineering and Institute for Genomic Medicine, discovered HIF-1a in the 1990s and has studied it ever since, pinpointing a multitude of genes in different types of cells that have their activity ramped up or down by the activated protein.
Advertisement
These changes in so-called "gene expression" help cells survive when oxygen-rich blood flow to an area slows or stops temporarily; they also allow tumors to build new blood vessels to feed themselves.

To learn how HIF-1a's own activity is controlled, the team looked for proteins from human cells that would attach to HIF-1a. They found two, MCM3 and MCM7, that limited HIF-1a's activity, and were also part of the DNA replication machinery. Those results were reported in 2011.

In the new research, Semenza and his colleagues further probed HIF-1a's relationship to DNA replication by comparing cells in low-oxygen conditions to cells kept under normal conditions.

They measured the amount of DNA replication complexes in the cells, as well as how active the complexes were. The cells kept in low-oxygen conditions, which had stopped dividing, had just as much of the DNA replication machinery as the normal dividing cells, the researchers found; the difference was that the machinery wasn't working.

It turned out that in the nondividing cells, HIF-1a was binding to a protein that loads the DNA replication complex onto DNA strands, and preventing the complex from being activated.

"Our experiments answered the long-standing question of how, exactly, cells stop dividing in response to low oxygen," Maimon Hubbi, Ph.D., a member of Semenza's team who is now working toward an M.D. degree said.

"It also shows us that the relationship between HIF-1a and the DNA replication complex is reciprocal - that is, each can shut the other down," Hubbi added.

The research is published in the journal Science Signaling.