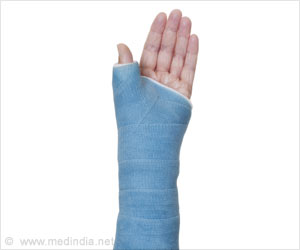 After surgical repair of a bone fracture, low intensity ultrasound is a popular treatment to improve recovery, but it doesn't work, says a large international study led by researchers at McMaster University.

In a clinical trial published by The BMJ, the researchers show no difference in the recovery time between using low intensity pulsed ultrasound (LIPUS) or a placebo device for patients with a fractured tibia (shinbone).

Abaloparatide-SC provides consistent protection against bone fractures in postmenopausal women with osteoporosis.
Advertisement
‘LIPUS was approved for fracture healing by the U.S. Food and Drug Administration (FDA) in 1994, but there has been no clear evidence of benefit to support its use.’
Tweet it Now

An accompanying editorial, also published, suggests "it is time to abandon this ineffective treatment" now that there is strong evidence it doesn't work. "LIPUS is commonly used in North America to accelerate fracture healing -- generating about $250 million in sales a year - but there has been no clear evidence of benefit to support its use," said principal investigator Jason Busse.

Understanding the Complexity of Fracture Epidemiology in Diabetes

Understanding of fracture risk in diabetes and identifying future areas of research will help better target patients in need of fracture prevention.
Advertisement
LIPUS was approved for fracture healing by the U.S. Food and Drug Administration (FDA) in 1994. Interventions to aid recovery have been popular for tibia fractures since this common fracture heals slowly and often needs further surgery to heal completely.

The international research team conducted a randomized controlled trial of 501 patients at 43 academic trauma centers in North America who underwent surgical repair for a tibia (lower leg) fracture between 2008 and 2012. The patients were assigned 20-minute daily treatment with either a LIPUS or a placebo device which looked the same. Everyone involved, including the physicians, data collectors, data analysts and the patients were blind to which treatment was used. Patients were followed until x-rays showed their fracture was healed, or for 12 months.

There was no difference in time to functional recovery whether patients were treated with the active or placebo device. There was also no difference in quality of life, return to work, leisure activities, or time to full weight-bearing. Co-principal investigator Mohit Bhandari, who is a professor of surgery at McMaster, pointed out the importance of ensuring medical devices are supported by evidence.

"LIPUS was approved for fracture healing on the basis of small trials that had important limitations, and they focussed on radiographic healing instead of patient important outcomes," said Bhandari, who also holds the Canada Research Chair in Evidence-Based Orthopaedic Surgery.

"The new trial results establish that LIPUS has no role in managing patients with surgically repaired fractures." In the accompanying editorial in The BMJ, Xavier Griffin, an associate professor of trauma surgery at the University of Oxford, said the results were clear.

"These authors report important patient-centered outcomes showing that low intensity pulsed ultrasound is of no benefit to adults with tibia fractures," he said. "It is time for us to make good use of their determination and abandon this ineffective treatment."

One in Ten Hip Fracture Patients in Canada Die in Hospitals

Colles fracture or broken wrist is a wrist fracture, which occurs within an inch of the wrist joint. Colles ...

Patella fracture is a kneecap injury that needs surgical correction. Undisplaced fracture can be healed by ...

Injuries are common in the sporting world. They can be minor like bruises and cuts, serious like fractures ...

Ultrasound scan or sonogram uses sound waves to obtain images of the internal organs. Ultrasound scan is used ...
This site uses cookies to deliver our services.By using our site, you acknowledge that you have read and understand our Cookie Policy, Privacy Policy, and our Terms of Use  Ok, Got it. Close
×